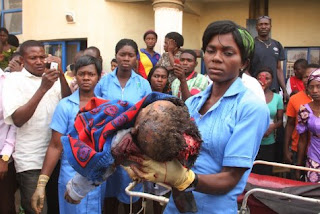 Another bomb was yesterday evening detonated in the Hausa quarters in Sapele, Delta state. The bomb explosion happened at a Qu’ranic school along Urhobo Road in Central Sapele. The attack was similar to the one that ripped through a Mosque in the township on Dec. 10 at a local Mosque in the area known as “Hausa quarters.”

There are confirmed reports of 7 injuries according the the Delta State police spokesperson Charles Mouka.

A source in the vicinity of the attack said the explosion shook the entire area. The bomb appeared to be aimed at a Quranic school and  Islamic centre on Urhobo Road by King Street where Muslim children usually gather to study and cram sections of the Koran.

There are no reports of fatalities at press time. The injured were rushed to central hospital in Sapele. Our sources believe that last night’s attack was carried out by fanatical Muslims who have targeted the new leadership of the mosque they consider too liberal.