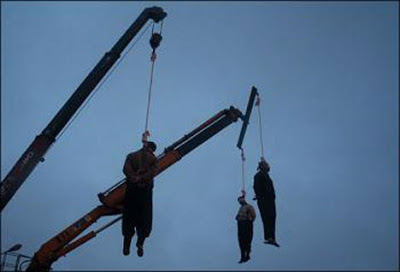 A Jos High Court yesterday sentenced a 26-year-old man,
Obinah John, to death by hanging for robbing one Dorothy Olaniyi of
N1,705. The convict was also sentenced to death for robbing Olaniyi of two rolls of peak milk in sachets, valued at N400…. Sometimes i dont seem to understand this our country. Why sentence someone who stole just that meanwhile those we know that steals trillions will be driving and flying around freely and Nigerians worship them. This is bizzarre.

The
prosecution counsel, Mr G. D. Fwonyon, who is the deputy director,
Public Prosecution in Plateau State had told the court that John, in
company with an accomplice, also named John, now at large, robbed the
woman on November 18, 2005 in her shop at Gada Biu, Jos at gunpoint.

He
told the court that John and his accomplice, having allegedly conspired
and used a gun to rob Olaniyi, had committed a criminal offence
punishable by hanging.

But John’s counsel, Mr. Tobechukwu
Kekemeke, rejected the prosecutor’s claim, and accused the police of
“not telling the truth about the gun” said to have been used by John.

Kekemeke
pointed out that the police presented three statements, with only the
last indicating a confession by the accused that he used a gun against
the victim.

The defence counsel further argued that the
prosecution had failed to prove to the court that the accused actually
used a gun to commit the act.

He asked the court to throw out the
case for lack of diligent prosecution, arguing that “the circumstances
of the third statement, in which John was said to have admitted
ownership of the gun, is suspect.”

In a 60-page judgment, Justice
Yargata Nimpa said the evidence before the court had shown that the
accused committed the offence and sentenced John to death by hanging.

“The accused is hereby sentenced to death by hanging, but the judgement is liable to an appeal,” Nimpa declared.

Kekemeke told the News Agency of Nigeria that he would appeal against the verdict.

“The
convict has the right to appeal against the judgment. It is not a
judgment that we are satisfied with, so we are definitely going to
appeal at the Court of Appeal,” he vowed.