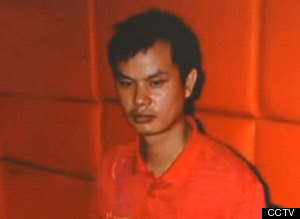 Li Hao, a Chinese man who held six women in an underground sex dungeon was sentenced to death Friday, according to CNN. He was convicted on charges of murder, rape, organized prostitution, illegal detention and selling pornography.
Li, who is 35, married and has a young son, worked for the city in Henan province while also carrying out his twisted fantasies.  For two years, starting in 2009, Li repeatedly raped the women, forced them into prostitution and made them perform in pornographic shows for the Web……continue reading
The women, who had worked at nightclubs, karaoke bars and salons in the nearby area, were held for periods between two and 21 months.
According to Reuters, Li’s crimes were revealed when a 23-year-old woman escaped and told police about the homemade dungeon. Two of the six women were later found dead.
In 2011, a Chinese police official apologized for his handling of the case and begged the public to give his department another chance, CNN reports.
Three of the women from the secret lair were also found guilty of murder over the killings of two of their fellow prisoners, according the news outlet. Their sentences were far lighter, however, due to the extenuating circumstances; in at least one case, for example, Li may have forced a woman to kill. One woman was sentenced to three years in prison and the other two were given probation.
Although China keeps its figures on death penalty cases secret, Amnesty International claims that more people were executed in the nation than in the rest of the world combined.
Source – Huff Post

11-Year-Old Girl Gang-Rapéd By 20 Men,Lawyer Claims It Was Her Fault