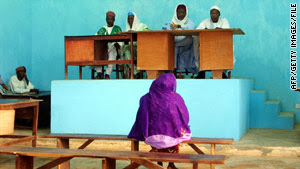 Upper Sharia court in Bauchi has sentenced a 30-year-old man, Umar Mohammed Kandahar to death by stoning, for impregnating his younger sister.
The court records, made available to journalists on Wednesday in Bauchi , showed that Umar was arraigned before Upper Sharia Court Unguwar Jaki, by the Bauchi State Shari’ah Commission, where he was accused of impregnating his younger sister from the same father.
Counsel to the Shariah Commission, Barrister Dayyabu Ayuba, told the court that the suspect is married with three wives, but forcefully had sex with his younger sister.
According to Ayuba, the younger sister was brought to his house by their father to help take her to school, but instead, he forced her and had intimate intercourse with her, when she was 16 years old. The act resulted in pregnancy and she has already delivered a baby, contrary to section 136(1) of the Bauchi State Penal code law 2001.
When asked by the presiding Shariah court judge, the accused pleaded guilty, but disagreed that he forced her to have intimate intercourse; instead he maintained that she accepted to have a sex with him. The Shariah Court Judge, Musa Barde sentenced him to death by stoning.
Meanwhile, the accused, has filed an appeal against the judgment before the Bauchi State Sharia Court of Appeal, arguing that he did not agree with the judgment.
Counsel to Umar, Barrister Sadiq Abubakar on Wednesday, filed a motion before Bauchi State High court number seven, asking for the bail of the accused, pending the determination of his appeal by the Sharia Court of appeal.
He told the court that the accused family suffered because of his detention since 2011 and asked the court to release him on bail, to ease the sufferings of his family.
The Presiding Judge, Justice Aliyu Baba Usman, has fixed Monday, November 25, 2013, for mentioning of the appeal.