Menu
No fewer than 200 structures were yesterday burnt in Otodo Gbame, an Egun community in the Lekki Phase 1 area of Lagos State, during a clash between some Egun and Yoruba youths. 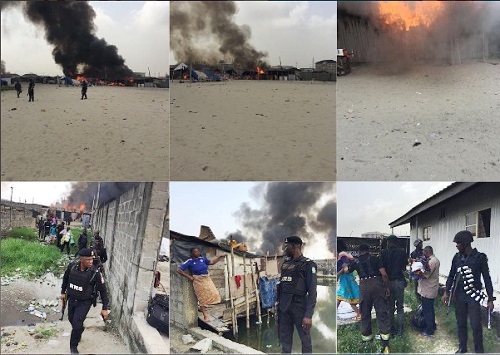 According to Vanguard, four people including a lady, Whefa Agonhu, allegedly drowned, while a 55-year-old woman, identified as Iya Abdulrahman, escaped the tragedy by swimming to the shore during a clash between some Egun and Yoruba youths in Otodo Gbame, an Egun community in the Lekki Phase 1 area of Lagos State.

It was learnt that the communal clash actually started last Monday between two men from the  ethnic groups when one resident of Egun extraction was said to have assaulted a Yoruba indigene for beating up his fiancé. In retaliation, the Yorubas, armed with machetes and other weapons, allegedly attacked the community, blocking its entrance and vandalizing the community shrine.

The crisis came to a head on Wednesday when the Yoruba youths set fire to the structures in the area at about 8am. The action was said to have triggered a clash between the youths of the Egun community and their Yoruba counterparts.


READ: OMG: This Man Was Matcheted To Death By Thugs In Lagos Island [GRAPHIC PHOTO + VIDEO]

Two persons were said to have been injured during the clash, while the area was quickly deserted as the fire raged. Some residents reportedly salvaged their property from the fire and fled.

It was gathered that while the clash escalated, some shops were looted and goods worth thousands of Naira carted away.

According to Punch Metro, the Rapid Response Squad, the Maroko division and the Area J Command, Ajah, reportedly went to the area to restore normalcy. A policeman on the team said an abandoned two-day-old baby was rescued from one of the burning structures.

“When the structures were set ablaze, the mother and the father of the baby fled. It was the cry of the baby that drew the attention of policemen to that room. The baby was locked inside the house. The baby was rescued and reunited with her parents

“Nobody was killed, but about three persons were injured. The entire community was razed.”

Speaking to a reporter, a resident disclosed that the Baale of the Community, Hunpe Dansu and one Remi Adedoyin, were arrested for their inability to forestall the clash from escalating on Monday. It was learned that Dansu was arrested when he visited the police station to complain over the issue. And they’re to be charged to court.

The State Police PRO, Lagos Command, Dolapo Badmos, while reacting to the clash, said that peace had returned to the community, saying “our intervention led to the rescue of a two-day old baby.”

She revealed further that supremacy battle triggered the clash between the Egun speaking community; mostly indigenes of Benin Republic and the Yoruba speaking community resulting in serious fighting and burning of houses.

The PPRO noted that the police immediately moved into the area to prevent further breakdown of law and order. Giving a background of what transpired, she said, “There is an Egun community mainly made up of people from Republic of Benin. They actually occupy illegal shanties.

“We were alerted about the breakdown of law and order in the area and immediately went to check Otodogbami community, Ikate Lekki Phase 1, where there is a fight between the Benin- Yoruba communities fighting over the supremacy in the territory.

“It’s an illegal settlement area, most of the structures there are shanties and because of a protracted dispute between themselves, they set fire on their different shanties. The Police moved into the area to restore peace and in the process of checking the area, we discovered that there was a woman who was trapped in one of the shanties with a two-day old baby who would have been burnt in the process,” Badmos added.

She said the State Government has taken over the area while the State Ministry of Physical Planning and Urban Development would move in to demolish the remaining shanties and clear the rubbles caused by the inferno.

“The Police is alive to its responsibility of ensuring the safety of lives and property of its citizenry and would not hesitate to carry out the necessary action where the need arises,” she said.

DONT MISS: SHOCKING: Woman Bites Off Her Friend’s Eyelid During A Fight In Lagos 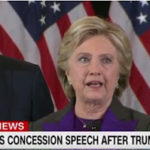