A suspected burglar identified as Joe Vincent, 33, was caught by cops wearing a mini-skirt and pink thong from the home he had just raided.

It all started when the suspected burglar identified as broke into the flat belonging to law firm worker Daisy Cook, 22. He then dressed in a peach-colored thong and black and cream mini skirt belonging to Daisy. Daisy has been out drinking with friends and returned home at about 10 am.

She returned home, walked through a communal area to the entrance to her flat and could hear someone inside saying “Daisy, I am your cousin and want you to leave him”. This Bugler opened the door and was holding a black handled serrated kitchen knife taken from her kitchen.

Daisy and her boyfriend wrestled with the mohawked burglar, screaming at him to get out of the flat. He ran downstairs and out of the front door and got away. He fled back to his home, but cops were called after he failed to pay for a £60 taxi journey.

The property was ransacked and there were some unusual statements written in lipstick referring to Daisy.

Police later tracked him down he was still wearing the thong and skirt under his clothes.

Vincent, of Ipswich, Suffolk, admitted burglary and was jailed for just 18 months on Monday.

Judge John Devaux sentenced him to three months, concurrently, for doing a runner from the taxi.

He said the actions had been “aggravated” by the drink and drugs and Vincent carrying the knife. 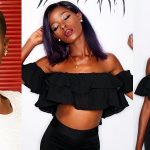 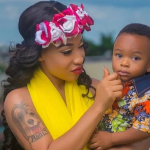