The Governor of Rivers state, Nyesom Wike has criticized President Muhammadu Buhari for refusing to sign the Electoral Amendment Bill into law.

Last week, December 6, 2018, President Buhari in a letter to the National Assembly declined to sign the bill, saying it is for fear of disrupting plans already in place for the 2019 elections. Read the report HERE.

In reaction during a meeting with the Anglican Bishop of Niger Delta North, Rt. Rev. Wisdom Ihunwo on Tuesday, December 11, 2018, Gov. Wike said that Buhari knows that if he assents to the bill, he will lose the 2019 presidential election. He also said that the President’s action is a threat to Nigeria’s unity.

“This present administration does not want the existence of one Nigeria. We don’t know if there will be Nigeria after the 2019 General elections.

“The National Assembly tried to cure the defects of the Electoral Act that led to controversies during the 2015 elections. After the passage, the President kept on giving countless excuses why he wouldn’t sign the amended Electoral Act.

“The whole essence of not signing the Electoral Act is to rig the 2019 General elections. And in the plot to rig the 2019 elections, Rivers State comes first and Akwa Ibom State is the second on their list.

“Now, they don’t want to use the smart card readers because they want to sit down and write results.

“It is painful that the President that says he is fighting corruption is leaving room for the rigging of the 2019 polls. There is no corruption worse than rigging. The President cannot set this country on fire”. 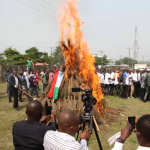 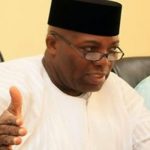