Security operatives have arrived Twon Brass local government area of the Bayelsa after a Deputy Commissioner of Police in charge of Federal Special Anti-Robbery Squad (SARS), Kola Okunola, was taken hostage by thugs.

We reported earlier that Mr. Kola Okunola was publicly humiliated and descended upon by angry mob after he was accused by the All Progressives Congress (APC) of collaborating with some politicians to snatch electoral materials and falsify results in favor of the People Democratic Party (PDP).

But the PDP has claimed that the youths who humiliated the deputy police commissioner publicly are thugs suspected to be loyal to a former Governor of Bayelsa State, Chief Timipre Sylva and the member representing Brass Constituency 1 in the Bayelsa State House òf Assembly, Israel Sunny-Goli.

The Secretary to the State Government, Mr. Kemela Okara, said that the thugs led by Sunny Goli and backed by the military were mounting pressure on the Deputy Commissioner òf Police to accept fake results from Brass.

He added that the DCP’s refusal to sign the fake result caused a disagreement between the police officer and a Major in the Nigerian Army and his men.

According to him, the DCP who insisted on submitting the right results to INEC, was taken hostage in the waters and stripped naked by the thugs. 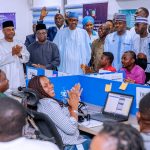 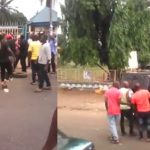