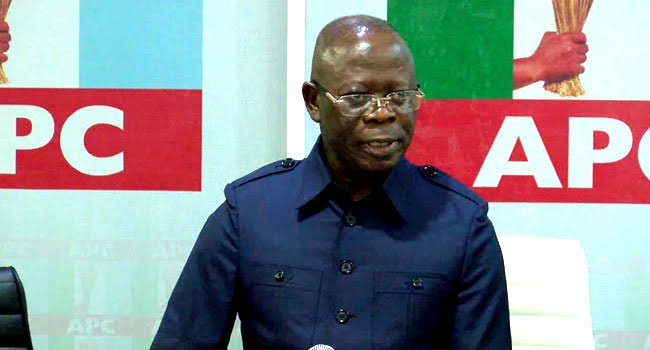 The national chairman of the All Progressives Congress (APC), Adams Oshiomhole says the ruling party will not be in power forever.

Oshiomhole stated this while briefing journalists on the Supreme Court judgement on the Imo state governorship election which favoured its candidate, Hope Uzodinma.

He was reacting to statements credited to the national chairman of the Peoples Democratic Party (PDP), Uche Secondus, who called for the sack of the Chief Justice of Nigeria, Tanko Mohammed.

Ohiomhole accused PDP of “laying the foundation for election rigging” in the country, hence, lacks the moral right to question the decision of the Supreme Court on the declaration of Uzodinma as winner of the 2019 Imo state governorship poll.

“If there is lesson to be learnt it is the fact that today APC is in power, that is few years back we were not in power. I don’t know how long we are going to be in power but it is safe to say we cannot be in power forever,” the former labour leader said.

“PDP has lost a state they never won and that the Supreme Court in their supreme wisdom re-established the fact that these 388 that was not counted are part and parcel of Imo state and therefore they cannot be wished away and they have accordingly added them. They found that Hope Uzodinma is not only the highest scorer he has the spread to be declared the winner of that election in Imo state.

“We commend the courage of the Supreme Court and we condemn in the strongest terms possible the attempt by PDP’s national chairman, Uche Secondus and his party to try to personalize a panel of eminent Jurists, all seven of them in their unanimous judgement. It was clear that this is the question of the law and these are the facts.

“For PDP and Secondus to call for the resignation of the Chief Justice of Nigeria (CJN) because they have lost a state that was never theirs is the height of recklessness,” he said.

Oshiomhole who recalled how the PDP applauded the Supreme Court’s decision against the APC in Zamfara , Sokoto, and Rivers states said it beats his imagination that the PDP chose to “throw caution to the wind and malign” the same legal institution after its verdict on the Imo governorship appeal.

He called the PDP’s decision to call on the justices of the Supreme Court to recuse themselves from hearing the appeals on the Sokoto, Benue, Adamawa and Kano states governorship polls as “cheap blackmail”.