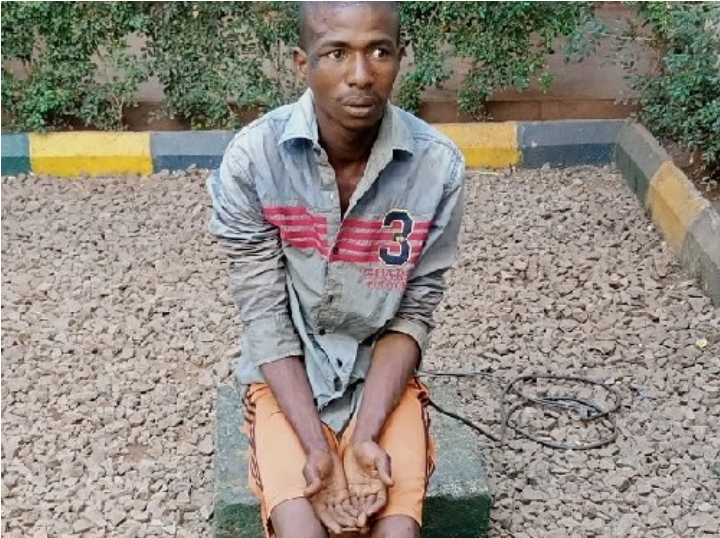 A 20-year-old herdsman identified as Laulo Isa, who reportedly raped a 54-years-old, has begged for forgiveness saying he committed the act under the influence of alcohol.

News Agency of Nigeria (NAN) recalls that Isa had on 28th December raped one Mrs Mary Okereke to death in Ufuezeraku, Ugwulangwu in Ohaozara local government area of Ebonyi State.

It was gathered that the victim was returning from the farm when the Herdsman accosted her, dragged her into the nearby bush and raped her to death.

As he was raping her, a passerby, flashed his torchlight on him and he ran away.

While being paraded on Tuesday, December 31, 2019, Isa said that he was not in his right senses when he committed the act and highly regrets his actions.

The herdsman further said the woman insulted him and that led to a struggle before he was able to overpower her.

“I am Laulo Isa, I am from Nassarawa. I came to work here in Ebonyi. I was seriously drunk and saw a woman in the night walking along the road. I approached her for sex and she started abusing me”

“We started abusing ourselves and I immediately pounced on her and she started struggling with me to free herself. I was seriously drunk at that time. As I was on her, a man who was passing flashed his torchlight on me and I ran away”.

The state Commissioner of Police, Awotunde Awosola while briefing Reporters on the incident said the suspect will be prosecuted for the crime. He said:

”On December 28, 2019, at about 8:pm, one Laulo Isa a herdsman aged 20 years accosted and waylaid one 54 years old Mary Okereke on Ufuezeraku Ugwulangwu road in Ohaozara local government area”.

“There was a struggle between the two of them but he overpowered the woman and had carnal knowledge of the woman. Unfortunately, the woman lost her life during the incident”.

Mr Awotunde said the Police with the assistance of the youths in the community combed the forests and farmlands in the area in search of the suspect.

According to him, the suspect had left some of his belongings at the scene of the incident which was used to identify him as the culprit.

“Through the concerted efforts of my DPO in Ohaozara with the assistance of the youths in the community, they began a search for the suspect who unfortunately left his cap and slippers in a bid to escape from that scene”.

“So, with the assistance from two other Fulani guys, we were able to identify him through that cap and slippers and he was subsequently arrested and he is now with us and he is going to face the full weight of the law”.

The Police Commissioner noted that the deceased has been deposited at the hospital for autopsy.

“I want to use the opportunity to assure the people of Ebonyi state that they don’t have anything to fear because the police is ready to provide security for all law abiding citizens”.