Nigerians have taken to social media once again to demand justice for Miss Bello Barakat, a student of the Institute Of Agriculture in Ibadan, who was stabbed to death after refusing to be raped in her home in Oyo State. 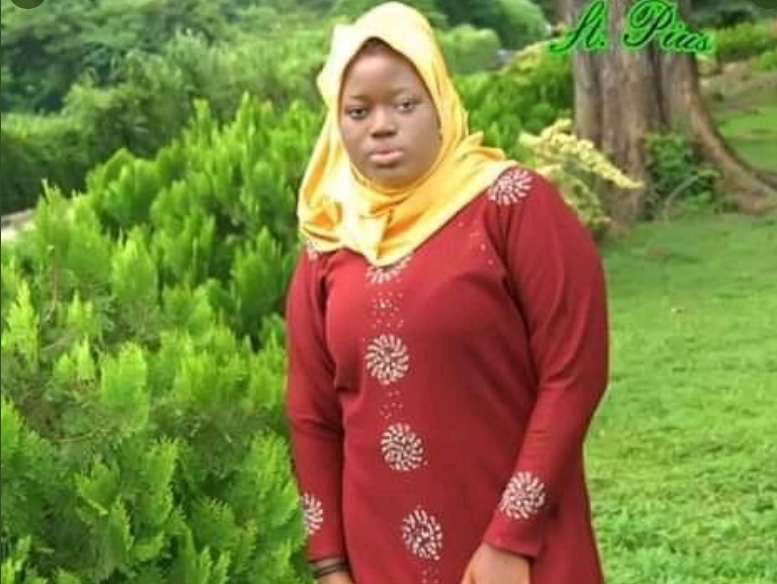 This is coming in the wake of a 22-year-old microbiology student of the University of Benin (UNIBEN), Uwa Omozuwa, who was brutally raped and murdered by unknown assailants while reading her books inside RCCG church in Benin city.

While the death of Miss Omozuwa is still being investigated by the police oas ordered by President Muhammadu Buhari, another female student identified as Bello Barakat has fallen too.

A Facebook user, Tunji Olatunji, who shared the sad news on his page, said Miss Barakat was in her home when some supposed robbers attacked and stabbed her to death while she was resisting their rape attempt. See his post below: 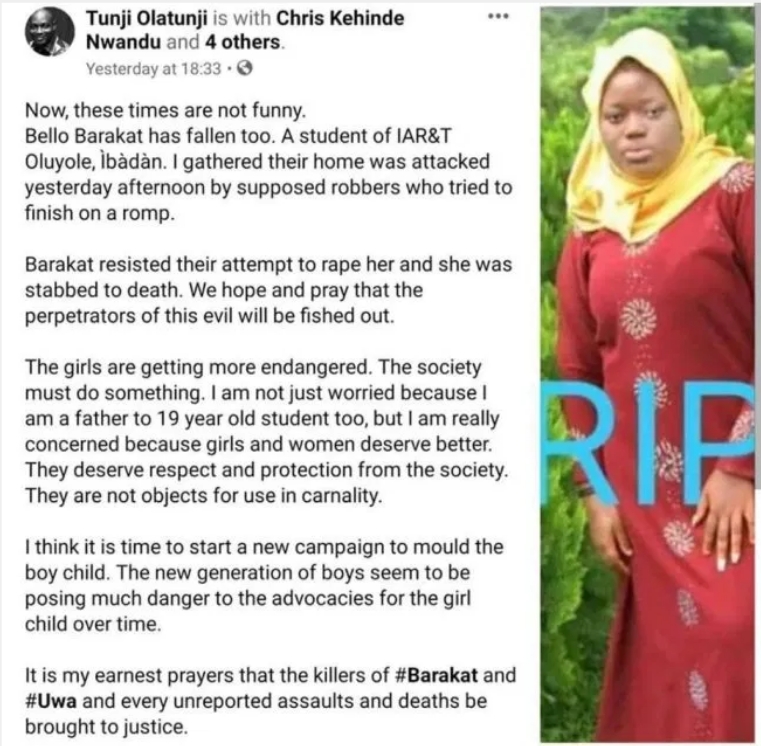 Nigerians have taken to social media to demand Justice for the latest rape victim with the hashtag #JusticeForBarakat.

Barakat was in the comfort of her home & still got raped & killed. Stop making dumb excuses for rapists. #Justiceforbarakat pic.twitter.com/hWMtzwA3Xk

Not again !!!! Can you see why not doing anything is dangerous??? Can you see what they are doing to us???? Help usssss! Help us stop this. This young woman was raped and killed yesterday in Ibadan. What is happening??? #JusticeForBarakat pic.twitter.com/v2DqCAGC3t

I'm waiting for these fucking holier than thou nitwits to say that Barakat wasn't wearing the hijab properly. How much longer is this rubbish going to continue, for God's sake?!#justiceforbarakat

good morning. another girl has been raped and killed. her name is Barakat Bello. she was in her HOME. All you people that like to give excuses for rape, what excuse are you going to give for a hijabi that was raped and murdered in her own home? #JusticeForBarakat

Can you imagine the hurt in her father's heart right now?
Not only did he find his daughter's body, he also got to know she was raped! RAPED!!!!! AND THEN KILLED!!!!!!!

Another day
Another hashtag.
I hate it here
STOP RAPING WOMEN !!!! #Justiceforbarakat !!!

barakat bello was in her house when some men came to rape her & kill her . this happened in Ibadan yesterday , she's 18 #JusticeForBarakat pic.twitter.com/GYTepzfumh

Barakat was just 18. She was fully clothed and in HER house. Y’all idiots should come & tell us how she “asked” for it. Cause y’all were still asking why Uwa went to church to read. So tell us what Barakat should NOT have done to avoid being raped and KILLED #JusticeForBarakat

Barakat Bello was raped and killed in her house yesterday,she was just 18.
When will this end 🤦🏾‍♂️#Justiceforbarakat pic.twitter.com/LdwIlXTXMz

Yet she was raped & murdered! When you rationalize rape, you empower rapists #justiceforbarakat

another woman has been raped & killed. we've literally all been waking up to more bad news. when does this end? 💔 #JusticeForBarakat

While we were expressing shock and anger over the rape and murder of Uwa in Benin, this lady was raped and murdered in Ibadan last night.

It is safe to say we have an epidemic on our hands. Ending is now a national emergency issue, worse than police brutality #justiceforbarakat pic.twitter.com/GkIgWhvxI2

"Why was she wearing something skimpy?"🤡

She was fully clothed so I don’t even want to see all your rubbish takes on indencent dressing,the perpetrators must be brought to justice.#Justiceforbarakat

Another hashtag #JusticeforBarakat another life lost.

This happened yesterday in Ibadan.

To the rape Apologists, please come and tell us the excuse for raping some that dressed decently like this woman before thunder from American Police will strike all of you!!!
Another day
Another life wasted by animals in Human skin
😭😢😭#JusticeForBarakat pic.twitter.com/ypGPhUPYZa

Everyday is another day to find justice for another Woman that was raped & killed like Christmas Chicken. When will this Wickedness Stop? Enough is Enough #JusticeForBarakat 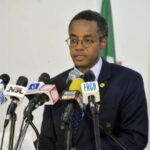 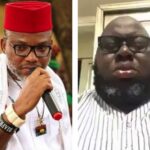