Ogun State Police Command has arrested the General Overseer of The Church of the Lord, Prophet Ebenezer Ajigbotoluwa, for allegedly defiling and impregnating two underage sisters in his church in Olomore, Abeokuta. 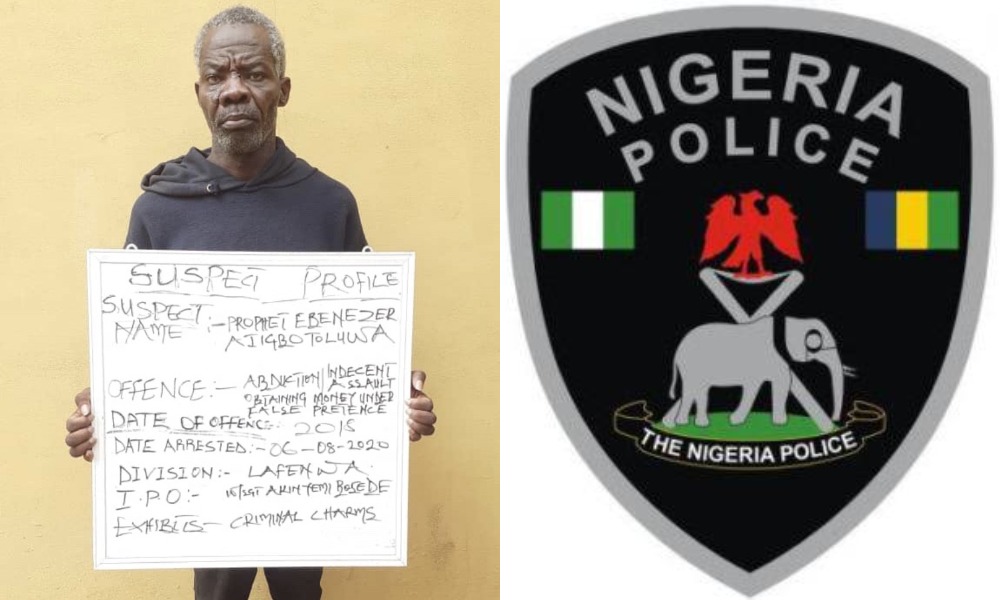 A statement issued by the command’s spokesman, DSP Abimbola Oyeyemi, revealed that the Prophet also defrauded the girls’ mother of N2million for what he claimed was for “spiritual cleansing.”

The suspect was arrested following a report by the mother of the victims who reported at Lafenwa Police Station that she fell sick in 2018 and was taken to the church for spiritual healing.

She stated further that the pastor took advantage of her sickness and asked her entire family of six to move into the church premises to avoid being afflicted with the same sickness.

According to her, there and then, the prophet started having sex with her daughters, aged 16 and 13, unknown to her. The pastor impregnated the two girls and went on to procure abortions for them in a private clinic.

Apart from that, the prophet defrauded the family of N2 million cash, which he collected for what he called spiritual cleansing.

Upon the report, the Divisional Police Officer of Lafenwa, Muraina Ayilara, led his men to the church but the place has been deserted. The CP then directed that the suspect be hunted for and brought to book.

In compliance with the directive, the DPO and his men embarked investigation, and their efforts paid off when the prophet was arrested on August 6 at about 5:00a.m.

On interrogation, the suspect confessed to the commission of most of the allegations against him and that it was the reason he ran away when he heard that the police were looking for him. Recovered from his home are assorted charms.

The Commissioner of Police, Edward A. Ajogun, has ordered the suspect to be transferred to state criminal investigation and intelligence department for further investigation.

Ajogun also warned those hiding under the umbrella of religion to perpetrate evils to desist from it or meet their waterloo.

The CP therefore appealed to members of the public to beware of those wolves in sheep clothings masquerading as men of God as they were out to milk them before destroying their lives.

KanyiDaily recalls that a 48-year-old Pastor had earlier confessed that an evil spirit led him into defiling his three siblings and another girl in Edo State.