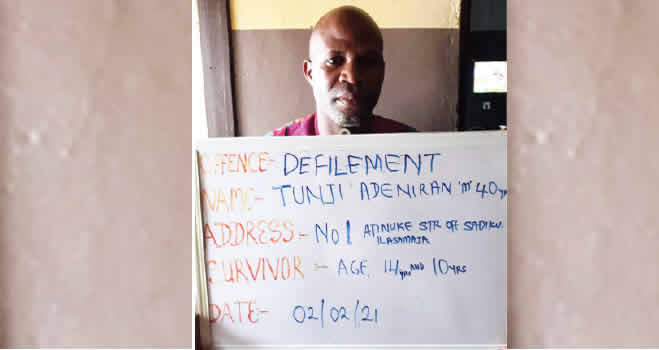 Adeniran, a butcher in Ilasamaja area, had reportedly been molesting the girls, who are in Primary 5, for a long time until recently when Ola opened up to her class teacher.

It was learnt that the teacher had during a class last week advised the pupils not to allow anyone touch their private parts when Ola suddenly burst into tears.

After the class, she was said to have taken the teacher into her confidence, narrating how Adeniran had allegedly serially abused her and her younger sister.

It was gathered that the state Ministry of Youth and Social Development intervened in the case and Adeniran was arrested on Tuesday.

A social worker with the ministry, who spoke on condition of anonymity, said that the girls had been taken for tests and placed in a shelter in Idi Araba.

The official said, “The result of defilement will be out soon. It was discovered that they have been infected and they were given drugs. According to the girls’ mother, her older daughter had once reported to her that the suspect was having sex with her. She said she also reported her husband to his family but he denied it.

“The woman however said she was not aware her husband was molesting her second daughter. The older girl said the man had been sexually harassing her for about four years. When the woman was further interrogated, she said she was tired of the marriage because the suspect demands sex every day and she could not cope with him anymore.’’

When contacted, the spokesperson for the police in the state, CSP Muyiwa Adejobi, confirmed Adeniran’s arrest, adding that he would be taken to court on Monday.

“Yes, we have the case and the suspect is with us. The Commissioner of Police, CP Hakeem Odumosu, has stepped up mechanisms to reduce rape, sexual harassment, gender and domestic violence to the barest minimum in the state. These offences are inhuman and we condemn them in totality,” he said.

KanyiDaily had earlier reported that a 23-years-old man, Iniobong Moses, was sentenced to to life imprisonment for raping his three-year-old stepdaughter in Akwa Ibom.

READ:  Hisbah Arrests Man Who Put Himself Up For Sale For N20M Due To Poverty In Kano 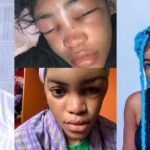 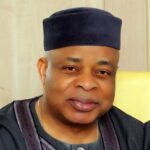