The General Overseer of the Synagogue Church Of All Nations (SCOAN), Prophet Temitope Balogun Joshua, popularly known as TB Joshua, has released the video of a prophecy for Nigeria which he gave almost seven years ago on July 27, 2014. 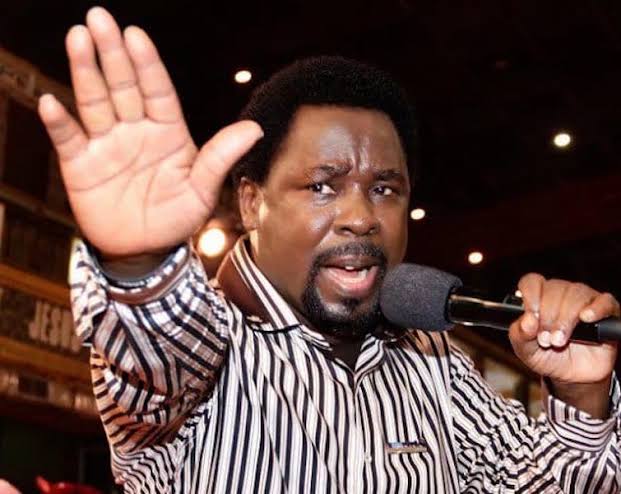 In the video cited by The Nation, Prophet TB Joshua was heard prophesying to the congregation during a service at SCOAN that Nigeria would be covered by a cloud of “crisis, murder, killings, destruction” but would not break up.

“Beyond this crisis, Nigeria is beautiful. Your prayer now is that you should witness it so that this crisis will not take you away,” the cleric declared.

“It is decreed that this nation will be reckoned with as a powerful nation,” he continued, adding that his prophecy would become a point of reference many years later.

He, however, warned members of the ‘political class’ of impending repercussions for their contributions to the crisis.

“Huge trouble is coming and no human being will withstand it unless you don’t have hand in that trouble,” he boldly declared.

“There is a cloud that covers Nigeria… the cloud of crisis, murder, killings, destruction covers Nigeria. The cloud will go; Nigeria will remain.”

READ:  Timaya Arrested By Police After A Lady Accused Him Of ‘Hit And Run’ In Lagos [Video]

Prophet TB Joshua then questioned the rationale of those who are “interested in power that cannot give them peace.”

“Power without peace is powerless…The manner you have that power will determine whether there will be peace in it,” he counselled.

Calling on his followers to pray for Nigeria, the cleric insisted that Nigeria would not break up. “I want to assure you: Nigeria – nothing will happen to Nigeria. Nigeria will remain one!”

Speaking on the spate of insecurity fuelled by banditry and terrorism, Joshua revealed: “They have infiltrated everywhere. There is no section or department in this country that these people are not there. It has become a professional job.”

He stressed that protection only lies in God. “There is no one that is secured by power and might and gun that they cannot get unless those whom God protects – because they have infiltrated everywhere. They are no more inside the bush; they are everywhere.”

Propeht TB Joshua called on the ‘political class’ to eschew differences and “discuss about the security and oneness of this country.

“There will be answer if they can pay the price, put their political agenda behind and discuss the unity of this nation,” he stressed, describing the situation of Nigeria as “very sensitive”.

“Quote me once again – security, police, guns, soldiers cannot protect anyone again because everywhere is infiltrated,” he concluded before praying for God’s will to be done.

In a short introduction to the clip “from the archives”, Joshua explained more about the timing of prophecy.

“Prophecy is given when there is no situation on the ground,” he explained during a service on Friday 7th May 2021, adding a prophet would declare ‘it will rain’ when there was no sign of rain in the atmosphere.

KanyiDaily recalls that YouTube had recently suspended Prophet TB Joshua for ‘casting out homosexuality’ from his church members which is considered as hate speech against gay people.