Nollywood actress, Chioma Ifemeludike has taken to social media to narrate how she slept with Apostle Johnson Suleman, the General Overseer of Omega Fire Ministries.

In a video shared on her Instagram page, the actress confessed that she slept with the cleric twice and he gave her over five hundred thousand after their sexual escapades.

According to her, a colleague, Lynda Clems, hooked her up with the man of God when she just finished university and was waiting to do her National Youth Service Corps (NYSC).

After her first sexual intercourse with Apostle Suleman, he slipped his number into her hand and gave her a bundle of cash which she shared with her friend, and they parted ways.

Chioma said she didn’t know who the man of God was at the time she had sex with him until weeks later when she saw him trending in the news and felt people are being misled.

Months later, she met him again after her service at Lagos, and they had sex for the second time. That was when she gave her life to Christ at a Redeem church and since then, her past with the apostle keeps hunting her.

The actress called out her colleague, Lynda Clems to tell the truth as a mother and Christian to save millions of souls who are being misled and shame the devil.

She noted that her public confession came after her spirit continued to torment her, and she needed to restitute for the sin which she committed with the cleric in November 2016.

Sharing the video where she confessed her sins, she wrote: “True confession.

“Dear @lyndaclems, I have to tell the world about that hookup you arrange between @johnson_suleman_official and myself on the 20th November 2016 in a hotel at Ikeja, the apostle secretly gave me his number and we had a second meeting at oriental hotels Lagos.

“I’m sorry my conscience can’t hold it anymore. I encourage you to tell the truth as a mother and a Christian, to put the devil to shame and save millions of souls been misled…
.
“To my family and friends, I am sorry, don’t judge me 🙏🏾 please pray for me so the light of 🌕 God will continue to expose every works of darkness in my life and the church of God…”

READ:  Hold Apostle Suleman Responsible If Anything Happens To Me – Halima Abubakar

KanyiDaily recalls that Apostle Johnson Suleman was also recently accused of sleeping with the wife of one of his former pastors, Mike Davids.

READ:  Wema Bank Wants To Meet Davido As His Donations Hits Over N160m In 24 Hours 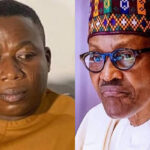 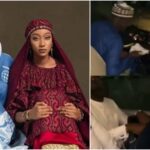