A video circulating on social media shows a couple crying for forgiveness after getting stuck together while having sex at Lake Bosomtwi in the Ashanti Region of Ghana.

It was gathered that the couple and a group of friends had gone to the lake for an excursion, but things took a different dimension when the two lovers allowed their libido to get the better of them by having sex in the river.

The lovers eventually got stuck while satisfying their sexual desire in the lake, and attempts by their friends and other bystanders to separate them proved abortive.

In a viral video, the couple could be heard screaming for help and begging for forgiveness as they couldn’t bear the excruciating pain which was unbearable.

It was learnt that it took the intervention of the traditional authorities to appease the river Gods for the couple to be separated peacefully. They were later sent to the hospital where they went through series of treatments.

KanyiDaily had also published another video showing the moment a man was stuck in between the legs of his secret lover, who is a married woman in Ogun State. 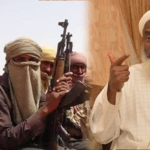 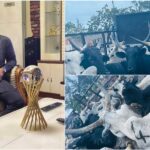