Governor Willie Obiano has warned the APC to stop playing politics with the insecurity in Anambra State. 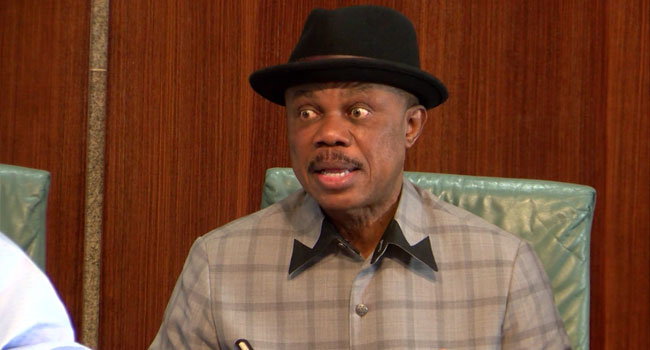 Anambra State Governor, Willie Obiano has accused the ruling the All Progressives Congress (APC) of playing politics with the recent unfortunate killings and insecurity in the state.

Governor Obiano stated this on Sunday while reacting to a recent comment by the APC candidate in the forthcoming Anambra Governorship election, Senator Andy Uba.

Andy Uba had called of the flag-off of his campaign in Onitsha with less than 24 hours to go, attributing the decision to the current state of security, and in honour Dr. Chike Akunyili, who was recently killed by unknown gunmen.

Obiano, in a statement through the Commissioner for Information and Public Enlightenment, Mr C. Don Adinuba, stated that Uba rather suspended his campaign flag-off, billed to hold last Saturday, because he received signal that President Muhammadu Buhari was unwilling to attend.

Noting that the suspension by Uba would be the third time since President Buhari refused to attend, the governor said that Uba was frustrated because there are no signs that Vice President, Yemi Osinbajo would attend either.

Governor Obiano insisted that there was no truth in the press release by the APC which was indirectly indicting President Buhari who is the country’s Commander–in–Chief of security forces.

Obiano said: “No society plays politics with its security without severe consequences. This is all the more so in a country like Nigeria which is now going through its most difficult security challenges in decades.

“It beats the imagination that the Anambra State branch of the All Progressives Congress (APC) should insist in the last three weeks on playing politics with the current security situation in Anambra State in particular and the Southeast in general, though there is a greater security crisis in some other parts of Nigeria.

“Anytime violence or murder is reported, as Anambra prepares to conduct a gubernatorial election on November 6, the APC in Anambra State points a finger in the direction of the state government. It does all this as part of the electioneering campaign strategy.

“But Anambra APC indicts President Muhammadu Buhari anytime it comments gratuitously on a negative security development in the state. President Buhari, not Governor Willie Obiano, is the Commander in Chief of the Nigerian Armed Forces and head of all security agencies in the country. Security is on the exclusive list of the 1999 Constitution, as amended.

“Each of the 36 state governors in the federation is merely the titular chief security officer of his state. No governor has control over the police force or the Department of State Security or the Nigeria Security & Civil Defence Corps(NSCDC) in his state, let alone any of the armed forces.

“Even the Anambra Vigilante Group (AVG) is supervised by the state police command, like any other state vigilante service.

“The Anambra State APC has always been aware of all these trite facts, but insists on playing to the gallery anytime there is a security issue.

“The people and government of Anambra State are convinced that the state APC is indicting President Buhari deliberately over security lapses.

READ:  "APC Has No Regard For Our Diversity" - Northern CAN Rejects Muslim-Muslim Ticket

“APC’s obnoxious behavior like this makes most Anambra people strongly believe that the killings in the state are politically motivated. After all, it is the only party in Anambra State which plays politics with not just security, but also politically guided assassinations in our beloved state which for seven years enjoyed the richly deserved reputation of the most peaceful state in the whole country.

“The APC in Anambra State is advised to stop indicting publicly President Buhari and the APC -controlled Federal Government for the spate of assassinations in the state”.

KanyiDaily recalls that yesterday, gunmen killed two persons during an attack at the offices of the Directorate of State Services (DSS) and Federal Road Safety Corps (FRSC) in Nnewi, Anambra State.

The incident comes after the gunmen suspected to be IPOB members burnt down the house of APC Chieftain, Joe Igbokwe in Nnewi, Anambra.