President Muhammadu Buhari said that Nigeria needs $1.5 trillion over a 10-year period to achieve an appreciable level of the National Infrastructure Stock. 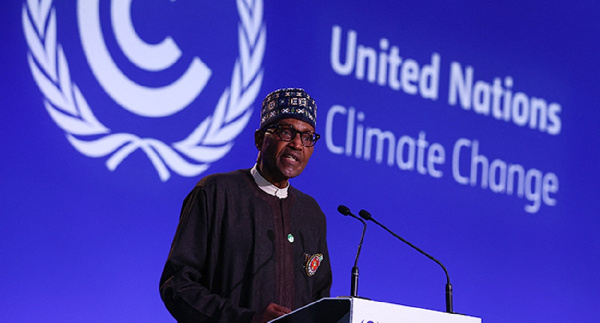 Buhari disclosed this while speaking with world leaders at the meeting held on the margins of the ongoing 2021 United Nations Climate Change Conference (COP26) in Glasgow, Scotland.

The President’s Senior Special Assistant on Media and Publicity, Garba Shehu, quoted him as saying: “Nigeria is ready for your investments in infrastructural development in the country.

“My administration has established a clear legal and regulatory framework for private financing of infrastructure to establish a standard process, especially on the monitoring and evaluation process. We look forward to working with you in this regard.”

Buhari also declared that his administration had taken infrastructure expansion in Nigeria seriously, conscious of the fact that new investments in critical sectors of the economy would aid lifting 100 million Nigerians from poverty by 2030.”

He said: “There is a nexus between infrastructural development and the overall economic development of a nation.

“My administration identified this early enough as a major enabler of sustainable economic development and the realisation of other continental and global development aspirations, particularly the 2030 Agenda for Sustainable Development Goals (SDGs).”

“On my assumption of office in 2015, Nigeria faced a huge infrastructure deficit and the total National Infrastructure Stock was estimated at 35 per cent of our Gross Domestic Product (GDP).

“In solving these problems, we embarked on a massive infrastructure expansion programme in the areas of healthcare, education, transportation, manufacturing, energy, housing, agriculture, and water resources.

The President welcomed the G7 group of countries for its groundbreaking plan to mobilise hundreds of billions of dollars of infrastructure investment for low – and middle-income countries.

READ:  US astronaut Neil Armstrong, first man on the moon, has died

He noted that the ‘Build Back Better World’ plan, an initiative of the G7, is expected to be a values-driven, high-standard, and transparent infrastructure partnership.

“It is our fervent hope and expectations that this plan will be pursued to its logical conclusion in order to bridge the infrastructural gap between the North and South,” he said.

Buhari said further that Nigeria is determined to cut its emissions to net zero by 2060. He noted that attaining national and global climate change goals will require adequate and sustained technical and financial support to developing countries.

He said greater effort should be channelled towards assisting developing nations to meet their Nationally Determined Contributions (NDCs) commitments through pledges made by developed countries to provide at least $100 billion yearly.

KanyiDaily recalls that American billionaire and founder of Amazon, Jeff Bezos had yesterday hailed President Buhari over his leadership role in restoring degraded lands and climate change in Nigeria.

READ:  I Will Disown Nigeria For Togo If Tinubu Becomes President - Bode George