Multi-award-winning singer, Rihanna has reportedly broken up with her rapper boyfriend, ASAP Rocky, after she caught him cheating on her with fashion designer, Amina Muaddi.

On Thursday, a fashion influencer, Louis Pisano had alleged in a tweet that the heavily pregnant singer dumped the rapper after he cheated on her with the fashion designer.

According to the tweet, Rocky cheated do Rihanna during Paris Fashion Week back in late February. But things “apparently hit the fan at Craig’s in Los Angeles.”

Amina was responsible for designing Fenty’s footwear offering and Rihanna is often seen in custom shoes from her own label.

Things apparently hit the fan at Craigs in LA

Pisano also shared a since-deleted screenshot from a Deux Moi Instagram post which reportedly featured fan-submitted photos of Rihanna and Rocky dining at Craig’s back in March. According to the anonymous sources who contacted Deux Moi, the couple were supposedly seen crying before leaving out the back door of the famous restaurant.

In another tweet, Pisano claimed that “ASAP & Amina is not new though as she was seeing him years ago and also collaborated with him on a collection of shoes.”

It appears the rapper and shoe designer have been collaborating in the fashion industry since at least 2020, when they teamed up for a shoe collection for Muaddi’s line.

Rihanna has even previously worn shoes from the collection. The singer and Muaddi have also worked together on custom shoes for her Fenty fashion company a number of times.

READ:  "Never Run Away From Your Parents" - Mans Says As He Shares Photo With His Mentally Challenged Dad

Interestingly, some fans were quick to point out within hours of Pisano’s initial tweet, Muaddi posted a photo to her Instagram account of Rihanna wearing the designer’s Ursina pump heels in white and red snakeskin. 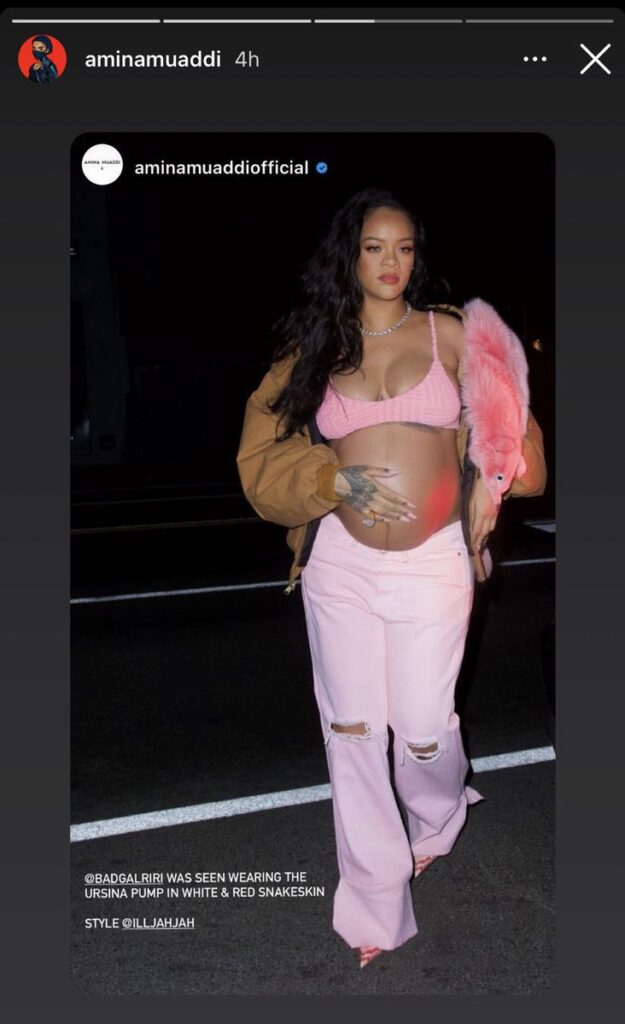 Other people noted that Rihanna does not currently follow Muaddi on Instagram, or even possibly unfollowed the designer. However, Rihanna doesn’t follow many people to begin with, so it’s unclear.

This latest development is coming just three days after RiRi graced the cover of Vogue Magazine and opened up about all her lover life, including moving ASAP Rocky out of the friend zone. “People don’t get out of the friend zone very easily with me,” Rihanna said. “And I certainly took a while to get over how much I know him and how much he knows me, because we also know how much trouble we can land each other in.” She also recalled their performance at the VMAs in 2012, when “He grabbed my ass on stage. That was not part of the rehearsal! I was like, What are you doing!? My manager was like, Oh, God, she must like this guy a little bit. She never lets this shit slide.” Things moved from friendship to romance during the coronavirus pandemic and world wide lockdown, during which Rihanna says

“He became my family in that time. We took a road trip from Los Angeles to New York, which solidified our bond. I cooked our food on this little janky grill I bought from Walmart. I still have it, too. It works like nobody’s business. I love the simple things but also the grand adventures. There’s no pretentious my-brand-your-brand bullshit, it’s just us living. I just feel like I can do any part of life by his side.” And when asked what she loves the most about the relationship, Rihanna said;

“Transparency with everything: how we’re feeling, what our goals are, what our fears and insecurities are. The vulnerability to be able to say what you feel about each other.”

Rihanna confirmed that she and Rocky weren’t “planning” to get pregnant, necessarily, but also weren’t not-planning. As she put it;

“Planning? I wouldn’t say planning. But certainly not planning against it. I don’t know when I ovulate or any of that type of shit. We just had fun. And then it was just there on the test. I didn’t waste any time. I called him inside and showed him. Then I was in the doctor’s office the next morning and our journey began.” In other news, popular Nigerian singer Davido has acquired a N2.5bn Land To Build His Dream House. The singer showed off the new land he acquired in the highbrow Banana Island, Ikoyi area of Lagos State. Watch the video.

READ:  Those Who Called Out Funke Akindele Should Do Same To Oppressors In Government - AY Makun 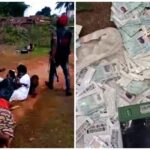