Pastor Umo Eno, who is the preferred of Akwa Ibom State Governor, Udom Emmanuel, has won the Peoples Democratic Party (PDP) governorship primary in the state. 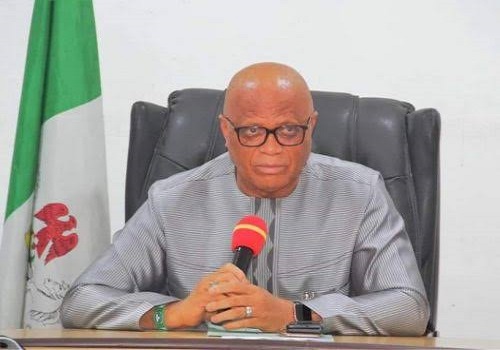 A total of 14 aspirants including one woman were cleared to participate in the primary held on Wednesday, May 25, 2020, at the Godswill Akpabio International Stadium, Uyo.

Eno, a former commissioner for lands and water resources in the state, scored 993 votes to clinch the party ticket for the 2023 governorship election.

His closest defeat rivals, Onofiok Luke, and Akan Okon, tied on three votes each in a primary that recorded two void votes from the 1,018 delegates accredited for the exercise.

With the victory, Eno will fly the PDP flag as the gubernatorial candidate of the party in the state in March 2023.

Declaring the winner, Philip Shuaibu, the deputy governor of Edo State and chairman of the governorship primary, said Eno satisfied the conditions of the party guidelines and has been declared the winner.

In his victory speech, Pastor Eno, who became emotional, promised to consolidate on the achievements of Governor Emmanuel.

He thanked the governor for seeing what others could not see in him and extended hands of fellowship to other aspirants to join him to build the party and the state.

Meanwhile, Oyo State Governor, Seyi Makinde has won the governorship primary of the Peoples Democratic Party (PDP) in the state.