The Southwest Zone D chapter of the National Association of Nigerian Students (NANS) has threatened to shut down all international airports over the prolonged strike by the Academic Staff Union of Universities (ASUU). 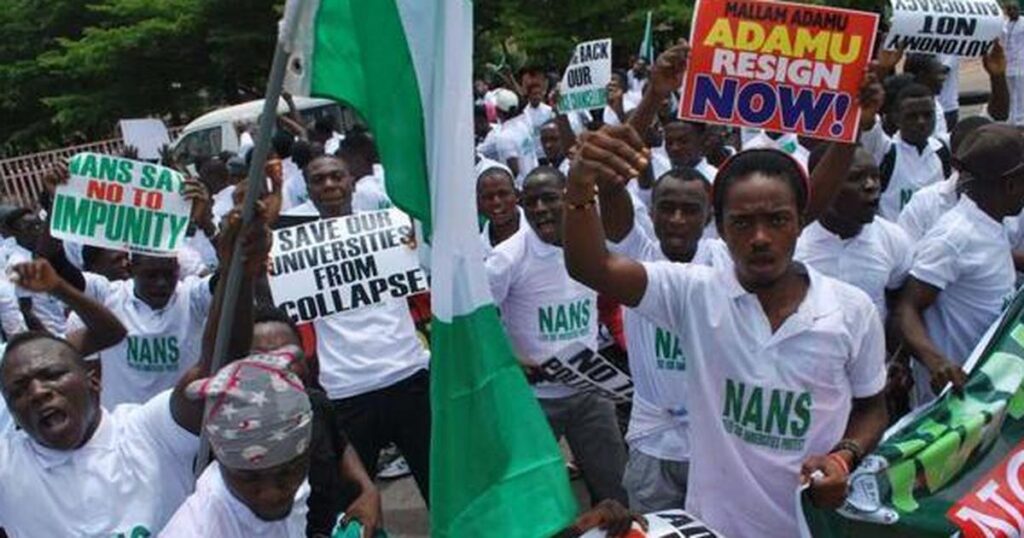 In a statement on Wednesday, the Coordinator of the NANS Zone D, Adegboye Olatunji kicked against the prolonged ASUU strike and the two-weeks warning strike recently embarked on by the Academic Staff Union of Polytechnics (ASUP).

Olatunji said the Nigerian students had waited long enough for the government to resolve the crisis, adding that the association would take the bull by the horns since President Muhammadu Buhari has failed to address the lingering strike actions.

NANS threatened to shut down the airports, stressing that the reason for the government’s lack of concern is because their children are not affected by the strikes as against the aviation union’s strike which was called off within 24 hours after a 2-day warning strike was embarked on.

The statement read, “It is timely and urgent to address this press conference today with a view to putting an end to the long lingering strike action of ASUU and ASUP (Academic Staff Union of Polytechnics), a total reformation of the educational sector.

“We are at a time when Nigerian Students have lost hope and do not know what’s next on the radar. ASUU strike has been on for over 3 months without forgetting the ASUP warning strike of 2 weeks.

“We have also waited for long to see if the Federal Government will dance to the music of Nigerian students who have been clamouring for an end to the ASUU strike but the reverse is the case.

“We’ve had several press conferences, granted several interviews, and held several meetings to plead with both ASUU and Federal Government. Our future is been jeopardised. We’re in a country where age is a key factor in labour market.

READ:  27-Year-Old Man Sneaked Into Woman's Room And Raped Her After She Refused His Proposal In Ogun

“Aviation unions gave a 2-day warning strike on shut down of flight operations. A meeting was scheduled by the Federal Government and strike action was called off in less than 24hours because the first-class citizens would be affected.

‘But it is so obvious that none of them is affected by ASUU/ASUP Strike. They have their children all over the world enjoying a smooth educational system.

“On Monday, May 16th, 2022, the Accountant General of the Federation, Ahmed Idris was arrested over alleged money laundering and diversion of public funds of at least N80 Billion by the Economic and Financial Crimes Commission (EFCC).

‘Where is the integrity of the government preaching against corruption? How much of the public funds would have settled the educational sector and put an end to the yearly ASUU/ASUP Strike action.

“For so long, ASUU/ASUP strike has been ongoing and the Federal Government has not been showing concern through the Minister of Education.

READ:  Tragedy Struck As Three Children Falls Off A Bridge While Swimming, Drowns In Ondo River

“We are ready to take the bull by the horns as Nigerian students will not keep silent and watch our future being ruined by the prolonged ASUU/ASUP Strike.

“According to the Commandment of Solidarity, we’re on the last C of ALUTA which is Confrontation. This is the time to call on all Nigerian students across all zones to come out in mass to take over all international airports in the country. Nigerian students are tired of the long-overdue strike action.

“We must state categorically to the Federal Government that all activities shall be shut down by over twenty-two million five hundred and twenty-seven (22,575,000) Nigerian students across Southwest Nigeria until ASUU / ASUP Strike is called off totally.”

KanyiDaily had also reported how the Nigerian Army opened fire and destroyed the properties of some students who were protesting peacefully against the prolonged ASUU strike in Akure, Ondo State.