Popular music mogul, Michael Collins Ajereh, better known as Don Jazzy has finally revealed why he didn’t want the outstanding youngster, Rema to be on the recently released ‘Overdose’ track. 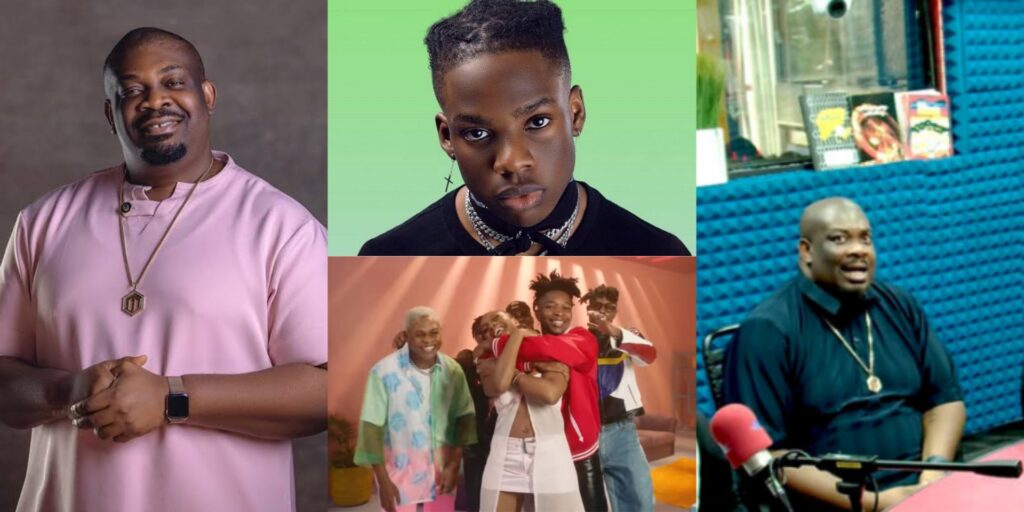 The music boss made his reason known during an interview with Cool FM in Lagos State. According to him, he didn’t want Rema on the track because he wanted the masses to see the new guys (Magixx, Boy Spyce, Ayra Starr, and Crayon).

Don Jazzy who felt that Rema’s presence could probably tilt the attention of individuals to him alone owing to the name he has made in the industry felt it was necessary to keep the 22-year-old away from the track and as usual it also became a big jam.

Don Jazzy while explaining further noted that when Mavin Records brings in a new artists, they try not to feature them immediately with the old ones so that they will be able to also achieve relevance and popularity on their own without any singer taking credit for it.

The Mavin boss also urged Nigerians to anticipate an All-Mavin Song (something similar to Dorobucci or Ada Obi) this year.

In the talent manager’s words:

“When I sign people and I introduce them to you guys like “ah this guy is talented o!”, last last it’s not me that’s going to stream all the music, it’s all of you that are still going to go and stream it. So my own is to just come and be ringing agungu everywhere, “this guy is talented o, go and check it out”. So obviously sometimes the fans maybe they’re suffering from fatigue, listening fatigue, or they’re just engrossed in some other artiste or their fave so they take their time. So for somebody like Crayon, I’ve been like “you people are not hearing this boy o, this boy is dope!” You understand? So I’m very happy that the intentionality we put in a song like Overdose was to actually make sure that people see him as the talented guy that he is which is why he’s the one starting the song and taking the chorus to carry the thing along. He’s the senior in the team so you people must see him now.

So we actually really didn’t want to put Rema on this one because I really wanted you guys to see (the other guys). Normally when we activate people, we try as much as possible to make sure we don’t do collaborations. So when it’s Magixx EP, it’s Magixx EP. You see him for who he is. When it’s Ayra, you see her for her. So everybody has done their EPs now so I felt like okay, they’ve seen them, there’s small acceptance, okay let’s try and amplify that with one of these songs. So this particular song is more like an Adaobi than a Dorobucci. Like Adaobi the other time, I tried to use it for you guys to see the younger guys as opposed to having like Tiwa and the others in there.

But we’re working on album that (Rema) is definitely a part of. It’s like a MAVIN All Star album that’s dropping this year.”

KanyiDaily also recalls that a party delegate has splashed millions of naira on his dream car after a series of party primaries.

“I Made Mistakes, But I Never Slept With Your Best Friend” – Kaffy’s Ex-Husband