A cross dresser identified as Amarachi has been apprehended and dragged to the police station after he was caught having sex with his fellow man in Delta State. 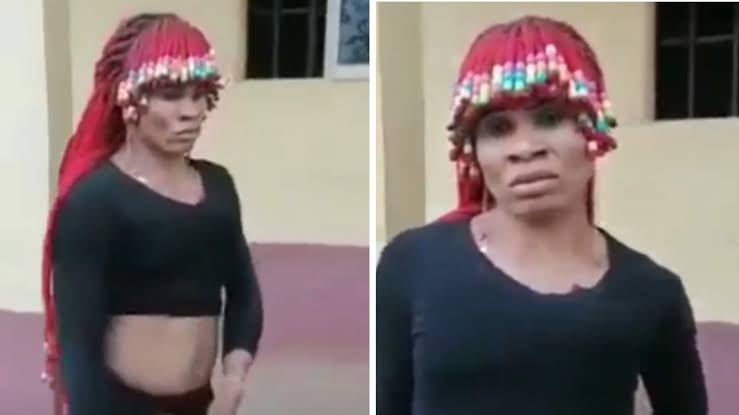 A video circulating on social media shows the moment the crossdresser was being Interrogated by an unidentified man at the police station after he was caught by ‘a customer who thought he was a sεx worker’.

During the interrogation, the crossdresser who identified himself as Amarachi said he is an indigene of Imo state but resides in Lagos. He revealed that he travelled to Asaba for a ‘dancing program.’

The young man said he was in an area where prostitutes usually hang out, when two men accosted him and asked for sex with the promise of paying him N1500, which he agreed to.

He said that during the sexual intercourse, the man’s friend wanted to get involved and when he tried resisting, they discovered that he was a crossdresser. Amara further stated that he has been involved in such an act since 2016.

READ:  My Brother Was Not Assassinated – Doctor’s Sister

KanyiDaily had also reported how another crossdresser, who posed as a prοstitute at a local nightclub, was apprehended after going home with a man for sεx in Benue State.

‘No PVC, No Church’: Catholic Priest Sends Worshippers Without PVC Back Home [Video]