A group of Islamic extremists has stoned and burnt to death a man (name yet to be known) who is said to be a member of the vigilante unit in Abuja, over an alleged blasphemous comment against Prophet Muhammad. 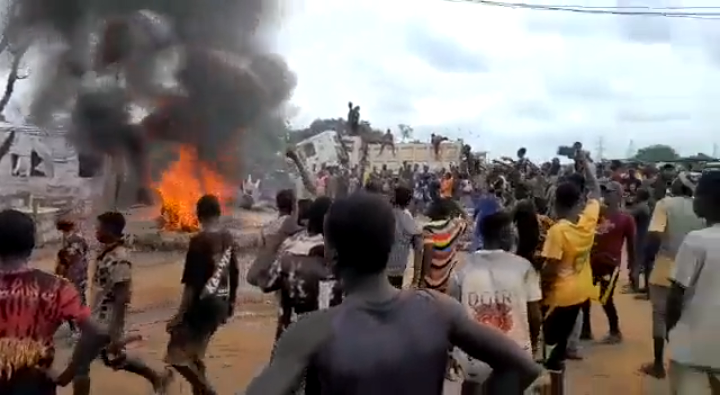 Reports have it that the mob first gorged out the man’s eyes in one of the security posts in Timber Market where he was locked up, then stoned and immediately set him ablaze.

A stampede broke out as traders, artisans, motorists, and passersby ran helter-skelter for their lives following the brutal killing of the man.

Police officers from Lugbe station arrived at the scene and fired gunshots into the air for more than 40 minutes to disperse the hoodlums.

However, the intervention came late, as the middle-aged victim was already fatally burnt prior to the Police’s arrival.

There is fear that a fight may break out in communities around the market, such as Sauka and Tudun Wada.

The police are yet to release a statement on the incident at the time of filing this report.

Below is a video from the crime scene:

BREAKING: Mob has stoned a guy and burnt him to ashes for blasphemy at Federal Housing Lugbe in Abuja.

This is coming days after a Christian student of Shehu Shagari College of Education, Sokoto, Deborah Samuel was also beaten and burnt to death by her Muslim colleagues for allegedly insulting Prophet Mohammed.

Many Feared Dead As Explosion Rocks Catholic Church In Ondo