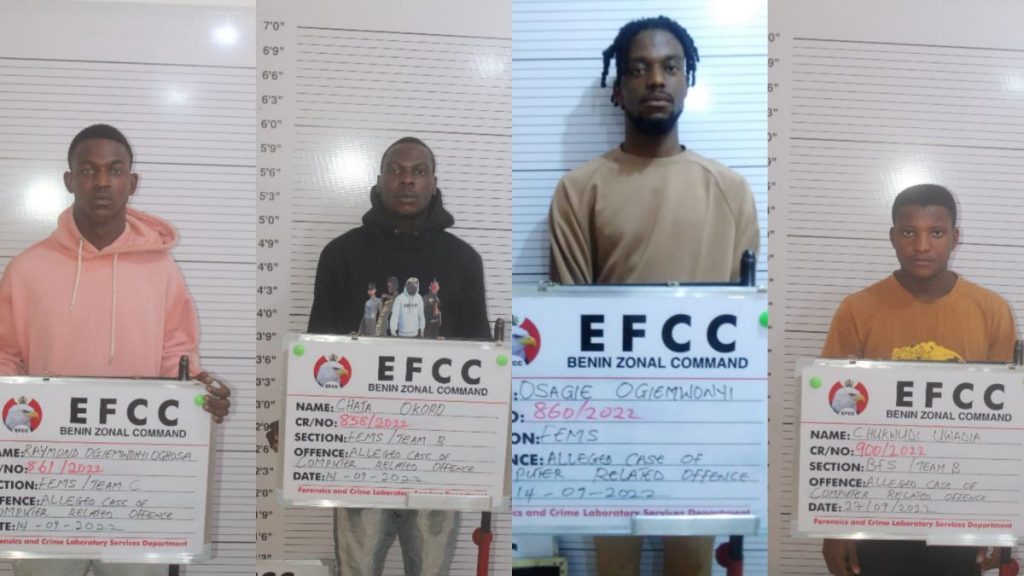 They were arraigned by the Benin Zonal Command of the EFCC on separate one-count charges of retention of proceeds of crime and personation.

This was disclosed in a statement issued on Wednesday by the Spokesman of the EFCC, Wilson Uwujaren.

The charge against Ogiemwonyi reads: “that you Raymond Oghosa Ogiemwonyi sometime between  May 2022 to 13th October  2022 in Benin City within the jurisdiction of this Honourable Court did take possession of the total sum of Eight Million, Two Hundred and Seventeen Thousand,  Seventy-six Naira Eighty-eight Kobo (N8,217,076.88) knowing that same represents proceeds of Clinton Nosakhare’s ( your chairman) criminal conduct to wit; Cybercrime and thereby committed an offence contrary to and punishable under Section 17 (b) of the Economic and Financial Crimes Commission  (Establishment ) Act 2004.

Upon arraignment, the defendants pleaded guilty to their respective charges.

Given their plea, prosecution counsel, K.U. Udus and I.K. Agwa prayed for the court to convict and sentence them accordingly.

However, the defence counsel, Chris Otasome pleaded with the court to temper justice with mercy as the defendants were first-time offenders and have become remorseful for their actions.

The convicts are to forfeit a Lexus RS350, 2010 model car, the balance of Nine Thousand One Hundred and Seven Naira Fifty-one Kobo (N9,107.51) found in Raymond Oghosa Ogiemwonyi’s Access bank account; one Laptop and phones being proceeds of crime to the Federal government of Nigeria.

In a similar development, the Benin Zonal Command on December  6, 2022, arraigned one Victor Omeni Njoku on a count charge of  possession of proceeds of crime before  Justice Ikponmwonba

The charge against him reads: “that you, Victor Omeni Njoku (M) (trading under the name and style of Adon projects NIG) on or about 16th December  2021 in Edo State within the jurisdiction of this Honourable Court did have in your possession the sum of Ten Million Naira (N10,000,000)  in your bank account number  5600175843 domiciled in Fidelity Bank  Plc, transferred from United Bank for Africa bank account of Aigboboh Sylvester knowing that same represent proceeds of. Mrs.  Margaret  Nwabueze’s criminal conduct to wit; obtaining by pretense and thereby committed an offence contrary to and punishable under section 17(b) of the Economic and Financial Crimes Commission  (Establishment) Act 2004”.

READ:  Man Arrests Lady He Met Online After She Failed To Visit Him Despite Collecting N8k For Transport

Upon arraignment, he pleaded not guilty to the charge prompting the prosecution counsel, I.K. Agwai to pray the court to remand the defendant to the Correctional Centre and fix a date for trial. However, counsel to the defendant pleaded with the court to grant his client bail as the alleged offence was bailable.

Justice Ikponmwonba granted the defendant bail for one million naira with a surety in like sum. The surety must be gainfully employed and shall be verified by both the court registrar and the EFCC

In other news, Kanyi Daily reported that the presidential candidate of the Labour Party (LP), Peter Obi celebrated the founder and President of Loveworld Inc, also known as Christ Embassy, Pastor Chris Oyakhilome on the occasion of his 59th birthday anniversary.

Obi described Oyakhilome as an “amazing and charismatic pastor.” 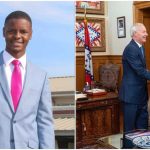 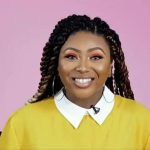