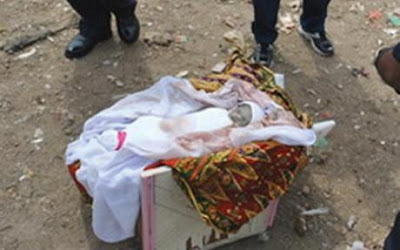 Culled From Leadership
One Mr Onyekachi  Ekwelum, who allegedly sold his six-month-old  son to raise funds to process his travel documents, would  be appearing before a magistrate in court to defend his action.
Mr Ekwelum allegedly hatched and executed the act without the consent of the wife, but the lid was blown off by his 20-year-old spouse Ozioma when she could not find their son and reported the matter to the police. Her husband had wanted to travel to Greece.
The Abia State commissioner of Police, Mr Usman Abubakar Tilli, who disclosed this to newsmen in his office on Monday said the police  mounted a man hunt that led to the rescue of the child and the arrest of the suspects.
CP Tilli  warned criminals to stay off the state as there would be no hiding place for them and said the suspects have been charged to court.
T he Commissioner  who expresses  concern over spate of  child trafficking said that on March 4 this  year Mr Chidiebere Samuel of Ovungwu in IsialaNgwa south  Local  government area that his wife Odinaka Samuel  connived with a nurse  Monica Benjamin who delivered her baby girl and sold the child at N150, 000.
Describing such acts as inhuman, he said the  suspects in  the criminal transaction have been apprehended  and charged to an Umuahia Magistrate court.
In a similar incident in  Amoji  Isiala Ngwa  north  local government  the commissioner said that  a man Mr Oluchukwu Ogidi  reported that his wife Kelechi on March 16 connived with one Dr Williams Oruwa who delivered her baby and sold the newborn baby boy for N350.He also said  the suspects have been arrested and charged to court  even as he revealed that in the course of investigation three pregnant women allegedly harboured by the suspect possibly to have their babies sold after delivery were discovered.