You must have read or heard about the OAU student who was caught trying to flush her new born baby down the toilet. [If you missed it, read it HERE], and read her account of what happened HERE.

Contrary to the news and gossips that went viral on the social media and newsprint publications about the gory incident of a female student who attempted ‘flushing’ a neonate at Moremi hall on Wednesday, 19th June, 2013 at around 6:52a.m; investigations have debunked the purported lies to expose the truth.

As gathered, Rotimi Oyinlola Diana, 22, is a 300L student of Agricultural Extension and Rural Development. The Omole estate student-resident in Mayfair explained that she was on campus on that day to squat with her friend for who resides in Moremi, Block B, room 103 for an examination she was supposed to have at 8a.m that morning.

Getting to campus late at night on Tuesday, it was learnt through the University’s Chief Security Officer (CSO), Mr. Paul Ogidi, that she could not immediately get herself something to eat but later resolved to buy beans cake within the hall premises.

Thereafter consuming the locally-made snack, Oyinlola complained severely of running stomach through the night and also urinated and stooled at regular intervals. She felt her stomach disorder owed to the fact of the bean cake (moin-moin) that she took the previous night.

At about eight minutes downside seven on Wednesday morning (6:52am), her roommates told her to get set so that she could be taken to the school health centre for proper medical care, which she consented.

The story, however, changed when she told her companion that she wanted to visit the toilet again. She was ushered to the toilet and told to get the roommates informed whenever she was through with the loo.

Oyinlola was in the toilet for several minutes and her friend, Shatope wondered was could have kept her that late at the loo. Shatope then decided to give Oyinlola a trail.

On getting to the toilet, Oyinlola had rationally locked herself inside- ‘for privacy sake’- but blood was seen flowing on the floor. Shatope, who was very scared on noticing this, called Oyinlola to know if everything was alright but all Oyinlola could say was that she (Shatope) should come inside to assist her. Shatope couldn’t enter the toilet because it had been locked by Oyinlola, who never knew she was on her way to deliver of her first child. In fact, she was at that moment very weak and could not make any move nor open the door. At this time, Oyinlola had delivered her baby boy inside the toilet.

Few minutes later, the attention of the hall cleaners at the block were called by the cries of the baby. They came to Oyinlola’s aid; who fainted shortly after she delivered the baby.

The two cleaners, Mrs. Shipebi Grace and Mrs. Cecilia Ologbenla explained that they forced their way into the toilet to salvage both the new-born baby and the mother.

They affirmed that: ‘she was not in any way attempting to kill the baby”.

In an interview with the Director of the University Health Services, Dr. Adebayo Irinoye said: “The girl and the baby are feeling very fine and the parents of the girl are around to also take care of their daughter and the new baby.

Irinoye explained that such case is not new because there have been so many instances of patients’ delivery in the toilet. ‘I guessed it was inexperience because she obviously was not aware of her due date which medically would have been July”. Dr.Irinoye, however said the baby was not delivered prematurely.

In a similar reaction, the Chief Security Officer, Mr. Paul Ogidi said: “She was not attempting to flush the baby, but, looking at the circumstances surrounding the birth of the child, one is likely to think it is so. When I visited the Health Centre this morning (Thursday, 20th June), she was in a good spirit; breastfeeding her baby. If she had the intention to kill or flush the baby, she would have aborted it a long time ago”.

Meanwhile, in an exclusive chat with the lady, Oyinlola Rotimi at the University Health Centre, she disclosed that she knew she was pregnant but only confided in some of her friends and the father of the baby, who is a Mechanical Engineering student of the Ivory tower (name withheld).

“Why would I flush or kill my baby after going through the pains of carrying it for good nine months. I’m not heartless and I thank God for my life and the safe delivery. I know God has the best for me and my baby. I seriously appreciate the cleaners for their help because I got here (the health centre) before I could understand everything that happened to me but now, I’m happy I’m alive and my baby is alive too” Oyinlola concluded.

We hereby appeal to the University community to lay aside religious sentiments and rift that might have erupted due to this incidence but embrace the spirit of oneness and consciousness to maintain the University’s lofty heights; as we shall continue to ‘Assert the Strength of the Pen, anywhere and anytime.’ 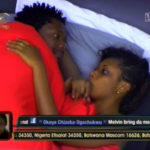