The online media community had a weird interactive session with APC Lagos governorship candidate, Mr. Babajide Olusola Sanwo-Olu on Tuesday, November 6, 2018; and everything was up for discussion including why you won’t see his white beards on campaign posters any longer.

The venue of this meeting was a cream coloured, two-storey apartment in upscale Ikoyi that was draped in a full-length Sanwo-Olu campaign banner. Outside, stern looking, muscular and hefty security personnel screened everyone and everything in sight, while roaming their eyes around for miscreants or street urchins with an agenda.

According to Sanwo-Olu, one journalist said to him without flinching:

“Sir, I don’t like your cap. I think you need to do away with it…while driving through Lagos earlier, ironically, my friend and I chatted about how unhealthy you look in some campaign posters. You need to do better with branding. Some of your pictures make you look like you are ill. And the white beard doesn’t look good on you…”,

Sanwo-Olu treated the observation concerning his campaign posters and looks with studied silence, nodded, chuckled and rubbed his chin with a smirk.

“That’s why I am now clean shaven. No more white beards!”

He announced to the audience and got everyone laughing. He then touched his trademark cap, rubbed his chin and chuckled some more.

“No, please there’s nothing wrong with your cap. It looks good on you!”

A few members of this audience protested, telling him the journalist who made the observation, got that one wrong.

“Okay, I think I will leave the cap. As for the campaign posters and my not looking healthy in photographs, that means the branding and PR team present here now have their work cut out for them”.

He was laughing, chuckling and making eye contact with everyone the whole time; and he was visibly enjoying himself in this spacious room filled with no-nonsense newshounds waiting to pick him apart.

Recall that days before the APC governorship primary election in Lagos, incumbent Governor Akinwunmi Ambode accused Sanwo-Olu of spraying fake dollars at a night club in the United States and checking into a Rehab to ostensibly deal with a long standing drug problem.

During the interactive session with the Sanwo-Olu, he was asked what does he make of Ambode’s allegations?

“You know it’s politics season and everything is fair game. And I respect the office of the Governor of Lagos State. Because of the respect I have for that office and for Governor Ambode, I chose not to respond to the baseless allegations at the time and I won’t be responding now. It was called a world press conference. But you would agree with me that the governor didn’t need a world press conference to make the allegations or to marshal some of the points he made. He could easily have sent everything to you guys as a press statement…..”

When it came to discussing his plans and proposed policies for Lagos, Sanwo-Olu came across as though he’s had it all figured out since he won the party ticket on October 2, 2018. He was articulate and profound all at once.

Sanwo-Olu spoke about how he will tackle the problem of flooding by de-silting a Lagos that lies below sea level, how he will tackle over-population by cooperating with neighbouring Southwest States and APC governors to develop their regions so that folks can migrate there even if they work in Lagos, his free Wi-Fi project in public places, getting local governments to fix inner city roads in order to combat an endemic traffic challenge, and reviving the moribund asphalt companies in Lagos so that roads can be maintained all year round.

“I know Lagos so well because I have spent more than 15 years serving Lagos in various capacities since Nigeria’s return to democracy. I know Ajangbadi, I know Okokomaiko, I know Igando and Ikorodu. I will develop the mainland as I would the mainland. I know what the Lagos masterplan entails because I made inputs into the document. We will make Lagos work again and for all. I promise you that we will always listen and take feedback on board when I become governor.”

The interactive session ended with Sanwo-Olu posing for photographs and selfies with bloggers and a sprinkling of party supporters.

Outside, traffic was lighter in the gleaming street lights of Awolowo Road, Ikoyi.

“Sanwo-Eko!” one of those intimidating bouncers hollered into the still air to no one in particular, his biceps heaving with every scream, as I hurriedly downed my coffee, revved the engine and disappeared into the night. 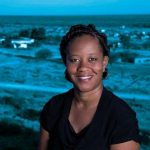 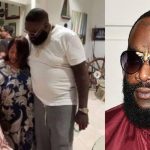