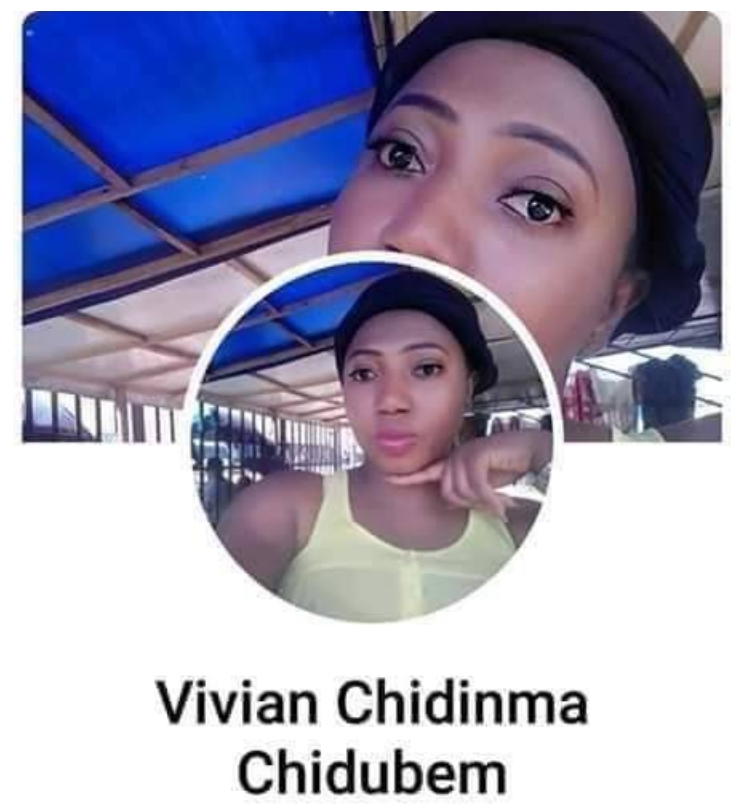 A Facebook user, Vivian Chidinma Chidubem, who went viral years ago after advising women on how to kill their cheating husbands, has reportedly been kicked out of her marriage.

Some years ago, Vivian took to a Facebook group called “Extraordinary Mum’s and Singles Ladies B,” to express support for slaughtering of cheating husbands.

According to her while advising women, instead of using knife they should remove the brake of their husband’s car so that he can be involved in a fatal accident that will lead to death or injury. She wrote:

“Please please my fellow ladies if your husband cheats, do not stab or use hot on him. Simply go and remove his car break. If he survives it, either the spinal cord will break, or his two legs. With that, he will only be facing you. Thanks.” 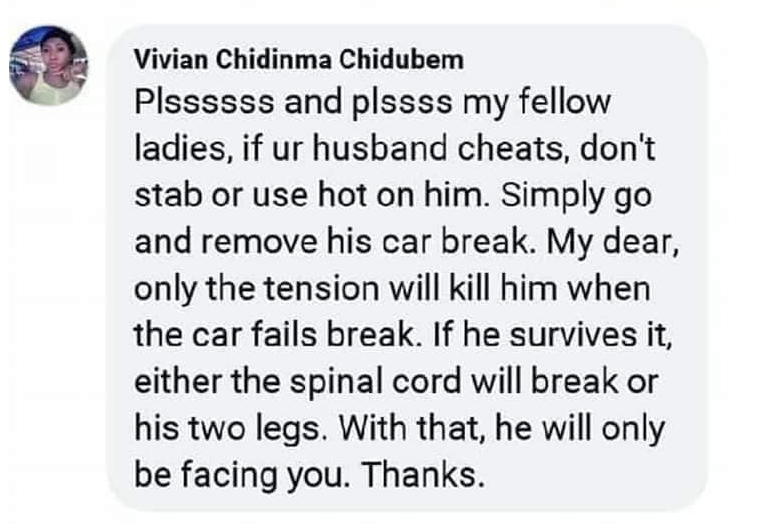 It is not clear whether Vivian was being sarcastic in her Facebook post which she has since deleted following outrage by angry Nigerians.

Vivian finally got married on January 16, 2019, according to her Facebook status.

Despite the fact thst she had deleted the outrageous post, trolls proceeded to Vivian’s Facebook marriage update to vent their anger and resentment, with many asking her husband to be careful.

Some digged up the screenshot of her comment, traced her husband and sent it to him. 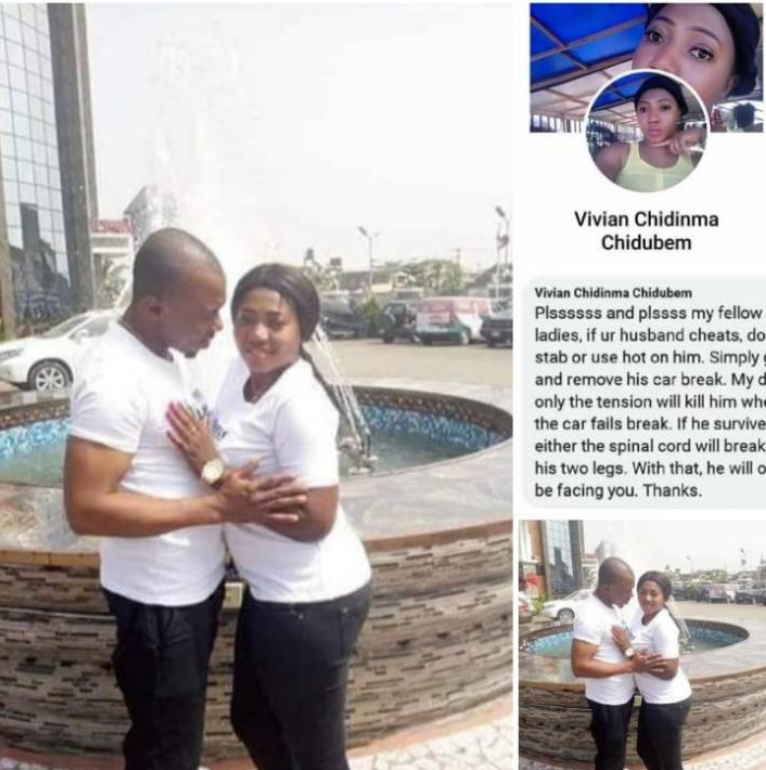 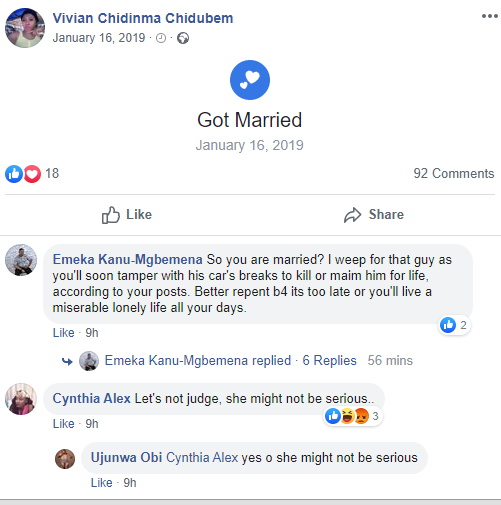 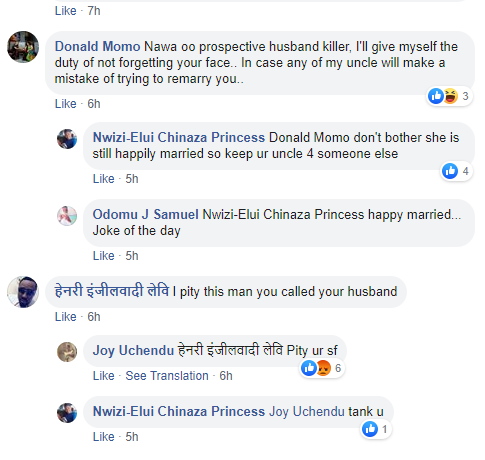 A fresh report from Arise News237 has it that Vivian’s husband has sent her packing over the alleged insensitive post.

According to the report, the husband sent her back to her father’s house saying that he is still too young to die and even if he becomes old, he wouldn’t want to die painful death in the hand of a murderous woman he assumed he trusted.

However, when contacted, Vivian denied the report of being kicked out of marriage by her husband. 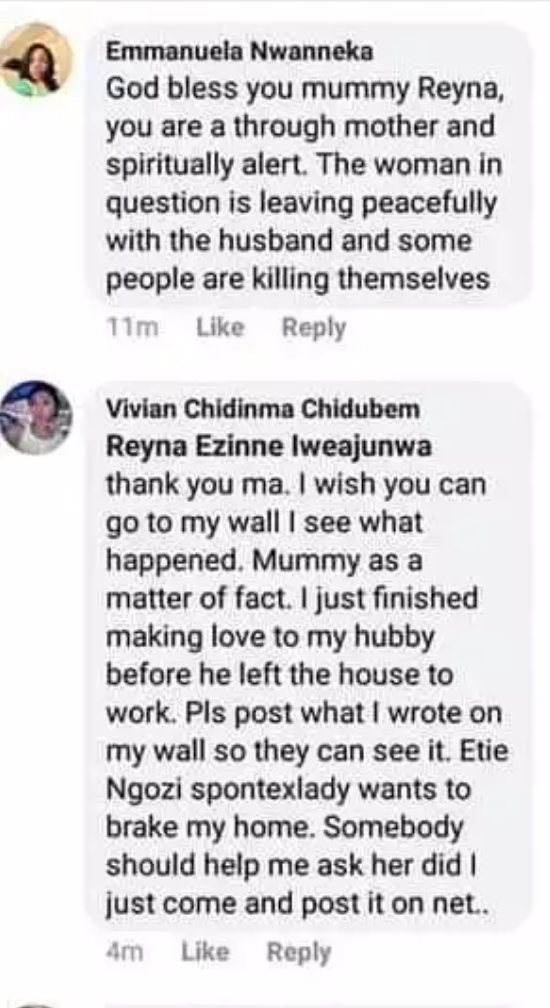 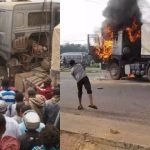 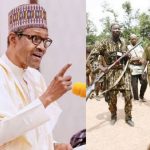