Fire has razed a section of the popular Eke Market in Afikpo Local Government Area of Ebonyi State, destroying goods worth millions of naira. 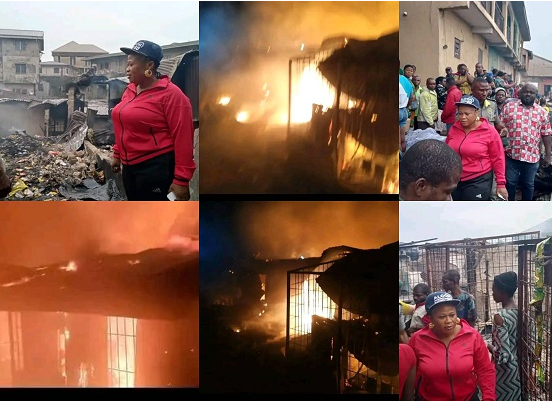 It was gathered that the fire incident which occurred in the late hours of Tuesday did not claim any life, but goods worth millions, including shops, were destroyed by the inferno.

The cause of the fire was not yet known as at the time of this report but the traders who were taken unawares made frantic efforts to save their goods without success as the fire burnt their goods with so much intensity.

The fire Service Unit in Afikpo could not mobilise to quench the raging inferno because its equipment were reportedly not functional.

This development prompted the youths of the Area to mobilize and stop the fire from further escalation.

The Executive Chairman of Afikpo North Local Government Area, Hon Barr Oby Oko Enyim arrived at the scene of the incident at about 6:35a.m on Wednesday.

Enyim sympathized with the victims and expressed confidence that as long as there was life, there is hope for the victims of the unfortunate incident.

Barr. Oby Oko Enyim who was taken round the scene of the fire disaster by the Chairman of Afikpo Market Traders Association, AMATA, Omezue Johnson Inya Oka described the incident as pathetic and promised that the Government at the Local level would ensure that basic faculties within the market was restored in no distant time.

She said, “I sympathize with victims of Afikpo fire outbreak that took place at Eke Market Motor Park at about 10pm on 12th July 2022.

“With sincere heart filled with sympathy and empathy knowing full well the consequences of this disaster on those directly affected, I pray you shall recover all you have lost in Jesus name Amen.

READ:  How Yahoo Boy Slept With Me For Eight Days, Stole My N1.3 Million - Nigerian Lady

“To Afikpo youths who volunteered to quench the fire amidst the intensity and absence of Fire service at the time they were most needed, God will reward you here on Earth and in Heaven for your contribution in communal and selfless service to save humanity.

“Afikpo North be consoled and remember the word of God in psalm 34:18″The Lord is near to the brokenhearted and saves the crushed in spirit”.

A statement by the spokesperson of the council, Suny Nkama, quoted the council chairman as promising that action will be initiated to unravel the cause of the inferno.

She however advised traders at the market to cultivate the habit of turning off their electrical appliances to avert future occurrences.

KanyiDaily had also reported how arrmed Bandits killed not less than 49 people during an attack at a market in the Goronyo local government area of Sokoto State.