Morocco has reached the World Cup quarter-finals for the first time, after beating former winners Spain on penalties at the Education City Stadium in Qatar. 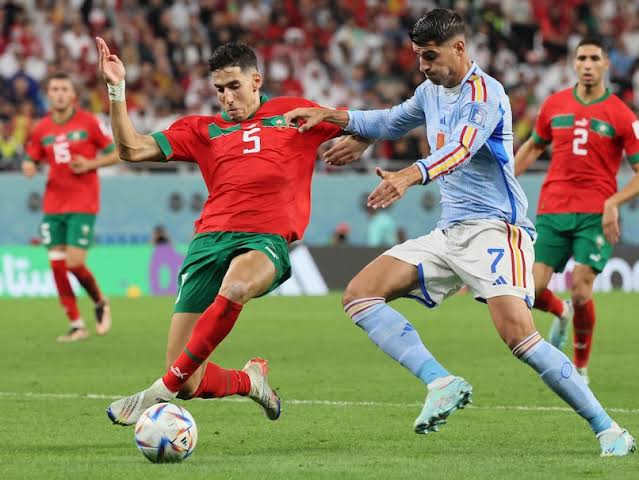 The two teams played out a draw after 120 minutes and Spain failed to convert any of their three penalties – goalkeeper Yaccine Bounou saving two – leaving PSG’s Achraf Hakimi to win it with a nerveless ‘Panenka’ to spark jubilant scenes.

The north African side defended superbly throughout and had two golden chances to win it in extra time — Walid Cheddira twice going close.

It mattered little, though, as Spain failed with their first three spot-kicks in the shootout, leaving Achraf Hakimi to nervelessly convert the decisive kick with an audacious Panenka chip, and send his team through to a meeting with Portugal or Switzerland in the third quarterfinal on Saturday.

The pattern of the game was established from the first whistle, Spain dominating possession but struggling to find a way through a disciplined Morocco backline.

Luis Enrique’s side had almost 70 percent of the ball in the first 45 minutes but went no closer than Marco Asensio’s shot into the side-netting, with Gavi and Ferran Torres both denied in the same move by spectacular blocks, although the offside flag was already up.

Morocco’s gameplan was clearly to soak up pressure and try to hit the Spanish on the break, Noussair Mazraoui’s fierce shot from range stinging the palms of Unai Simon, before Nayef Aguerd, unmarked at the far post, headed over a golden chance created by the trickery of Sofiane Boufal.

The same pattern continued into the second period, Morocco goalkeeper Yassine Bounou reacting smartly to push away Dani Olmo free-kicks at either end of the half, while Alvaro Morata fizzed a shot across the face of the goal shortly after his introduction.

Morocco had the two best chances of the first period of extra time, Cheddira first being denied by Aymeric Laporte’s challenge and then the right leg of Simon, but it was the African side’s superb defending at the other end that proved crucial.

Pablo Sarabia hit the post with Spain’s first kick of the shootout before Bounou saved from Carlos Soler and Sergio Busquets, giving the chance for Hakimi – born in Madrid – to convert the winning penalty with a Panenka kick.

Morocco had finished top of Group F over European giants Belgium and Croatia as well as Canada, with seven points.

Education City Stadium was filled mostly by Morocco fans, who went wild at the final whistle as their side reached the last eight for the first time, where they will face Portugal or Switzerland on Saturday (15:00 GMT).

KanyiDaily had also reported how Brazil made a huge statement on Monday night when they defeated South Korea 4-1 to reach the quarter-final against Croatia in the ongoing world cup in Qatar.

Related Topics:FootballgistMoroccoNewsSpainWorld Cup
Up Next