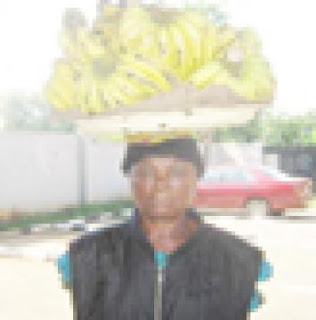 The sauntered into the Press Centre of the Nigerian Union of Journalists in Kaduna, carrying on her head a tray loaded with banana. Between her residence and the Press Centre, she had trekked a distance of about 10 kilometres, barring the fact that she had to branch to many other places as she hawked banana, a trade from which she has earned her livelihood for decades.

80-year-old Gladys Nnamode, an indigene of Obiagu Local Government Area, Enugu State, has lived in Kaduna since the early 70s. She had gone to Kaduna soon after the civil war ended in 1970 and has remained there ever since, only paying occasional visits to her native town. On arriving Kaduna, she had started life as a petty trader, selling yams and later tomatoes until about 20 years ago when she gave up both to hawk banana around the metropolis.