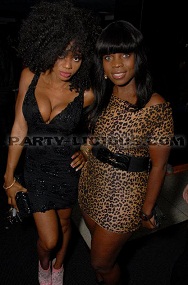 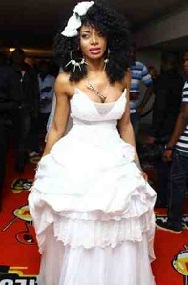 The Beri
Beri Singer Reprudencia and socialite/ business woman, Liz Gavy
fought dirty at the Headies last weekend. Dencia is one who is
sometimes described as an attention seeking upcoming artist, while Liz on the
other hand is most times described as a ‘High Class Lagos man
hunter’ (whatever that means).
Apparently,
Liz got liposuction last year in California, and during that period,
Dencia who was US based homed her and a friend but before leaving the duo chose
to steal her passport, money, clothes & other properties. Things flared up
recently when Dencia recognized a friend of Liz, Blossom Nyepon in a
picture rocking her top, she went to Twitter, to call out Blossom, who got
irritated and gave Liz a piece of her mind. She tweeted … 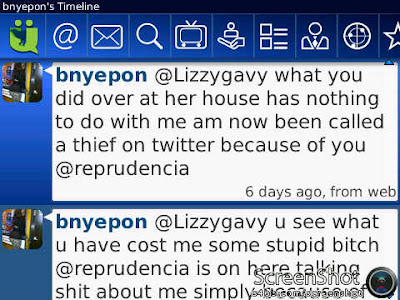 Well Liz being a
typical naija babe seems more into physical fights than twitter fight, it’s
alleged that she attacked Dencia back stage of the Headies, and things got
really messy. Its been a few days since the incident, and Liz has given us her
side of the story as published by Nigeriafilms.
Click READ MORE Below  to read it but mind u gist plenty.
…
“I met Reprudencia on via facebook back in 2008, she was
the one who contacted me requesting to be my friend and I considered adding her
because we shared common friends. She further introduced herself as a
fashionista and expressed her willingness to help me get bargains from US stores
— to which I was receptive initially. However, I figured that it would be
better, instead, that I travel to the US and have her take me around to the
various stores for her purported bargains. Then in september 2010, I was ready
to open my Ikoyi and Surulere outlets and decided to take a trip to the UK and
US to stock-up the new stores. While in the UK, during one a chat with
Reprudencia, she started trying to sell me some skin whitening injections and
pills, and claimed to be an agent for plastic surgeons incase I wanted to
undergo a surgical procedure to help me shed my body “FAT”. I told her I wasnt
interested in bleaching my skin (incidentally, it’s evident she is bleaching her
own skin, has silicon/fake boobs, and has undergone a nose-job), but the friend
I was staying with (Joy) said she was interested and I passed the phone for them
to talk and they both agreed to do business.The next day Joy sent $2000 to
Reprudencia and was assured that the package would be ready by the time I
arrived Los Angeles.

Upon my arrival in L.A, I contacted Reprudencia to
inform her I was lodged in a hotel in town and was ready to be taken to the
stores she’d mentioned earlier for the bargains. Little did I know that I was
setting myself up to be duped. She insisted that I come stay over at her new
apartment to which I obliged. She also asked that I please loan her some money
to help purchase some things for her new apartment, to which I also
obliged.Immediately I moved in with her she introduced me to a website,
purportedly belonging to her friend, who sold trendy sunglasses and persuaded me
to purchase her friend’s wares, to which I [again] obliged. After a week of
staying with her I realized everything she had told me on facebook and via
blackberry were all lies; she had no car,no house,absolutely nothing and no
job.I rented the car she drove around,I paid for the bed i slept on, infact I
paid for everything from groceries to the clothes she picked while I was
shopping for my business.

Shortly afterwards, my friend Blossom who was based in
Montreal, Canada came over to L.A to join me as we had earlier planned to meet
in L.A. Reprudencia kept making excuses upon excuses on why Joy’s package was
yet to arrive and had no forthcoming response when asked about the sunshades I’d
ordered from her friend. She later introduced Blossom and I to a plastic surgeon
friend who tried to talk us into undergoing an $18k worth liposuction surgical
procedure to which we flatly declined — only to later find out that she was
trying to lure us into paying for a free plastic surgery procedure for herself
based on an agreement she has with the surgeon due to her being his ‘AGENT’. She
even tried talking me into getting a fake social security card in order to get
an American credit card to which I also declined because I already had an
internationally accepted credit card from Nigeria. She went as far as stealing
my card and going on a shopping spree without my knowledge to which I reported
to my bank about her fraudulent transactions. She kept lying and making excuses
about Joy’s package, claiming the company she ordered the injections from had
delivered the package while we were out and therefore took it back. In response,
I asked to see proof of the order, e.g an online receipt or a creditcard
statement that shows the transaction, at that point she realized i had caught on
so she sent an email from her laptop to the fictitious company, and then replied
herself via her blackberry. She seemed to have forgotten that her blackberry had
a signature — at the end of the so-called reply sent by the company, there was
her name and an indication that it was sent from her bb. It was all a SCAM. It
then dawned on me she never ordered or paid for any skin whitening injections or
pills for Joy to begin with furthermore I realised that she had gone to her
friend who owned the website I ordered the Sunglasses to collect the payment I
made for the Sunglasses.

By then I’d had enough and confronted her about her
scams and dubious schemes, expectedly she denied any wrongdoing and flared-up.
She even threatened to call the police to throw me out. It took the efforts of
friends who witnessed the confrontation to calm her down. Consequently, I called
a cab and left her apartment for a hotel. She left her apartment before the cab
arrived. I waited at the hotel for a whole week to see if the injections she
claimed to have ordered for Joy would indeed arrive, to no avail and I lost
money for the Sunshades to her as well. At that point, Joy was understandably
very upset and was holding me responsible for everything because I introduced
her to Reprun..whatever

When she got home and realized Blossom and I had left,
she started accusing me of stealing her shoe and clothes,that sounded ridiculous
because:

2. Was I going to sell used clothes in my
shops?

3. The shoe she claimed I stole is a Gianmarco Lorenzi
immitation/fake she bought for $130 ,I sell these shoes.

4. She had told me her sister siezed her passport cause
she was ‘traveling too much instead of going to school’…she must have been
lying so I wouldn’t know all the so called trips she claimed to have made were
untrue. Only for her to send me a mail 3 months later claiming she couldnt find
her passport and she was sure I must have taken it. Reprun..whatever is a full
blooded cameroonian citizen on a USA student visa (though she claims to be
‘half-Nigerian’), so what on earth would I want to do with a Cameroonian
passport? I dont speak french and I dont want to live in Cameroon( I am PROUDLY
NIGERIAN), I have a multiple USA visa so I couldnt get my head around the
accusation.

Repru-whatever IS LIVING A CHAMPAGNE LIFE ON A PALMWINE
INCOME and projecting a false impression that life is greener on the other side
on FACEBOOK. Early this year I reported her to the police which I also have a
proof for.I have documented proof of her scams; E-mail exchanges and chats
between her and I, Police report, as well as proof that she swindled an Italian
friend last year.

She claims to have a warrant for my arrest; I have been
going to and fro the USA for several months now (most recently 2-months ago) and
have not been harrassed even once on account of any so-called warrant. She also
claims to have video evidence of my theft of her things while in her apartment,
I am now challenging her to produce the so-called evidence or forever hold her
peace.

I own three shops in Lagos (VGC, IKOYI, and SURULERE). I
have no partners, so I wonder how on earth I would even remotely consider
stealing from a fake, wanna-be celebrity, attention seeking tramp like
Repru-whatever . She is greedy, dubious and desperate,as the following video
further proves:All of the aformentioned culminated in the incident that occured
at the just concluded HEADIES 2011 awards. Upon her arrival in Nigeria for the
awards event, Repru-whatever started sending me threatening text messages and
challenging me to do my worst inspite of all she did to me. I guess the she has
seen a slight taste of that.”

A commenters question to Liz is
…

“If you never saw her passport, how do you know she’s
Cameroonian on a student visa? Why did you invite Blossom to stay in Dencia’s
house too if you had to buy a bed to sleep on? Why didn’t you dispute the
charges on your credit card for the sunglasses that never arrived? You’d get
your money back. Where’s the proof of what you’re saying since you have it, why
not just attach it to the story one time?”

Guess we’ll never know
what to believe or what really happened. Anyway check out this funny video of
Dencia that just surfaced online, it’s uncertain if she knew she was being
filmed.