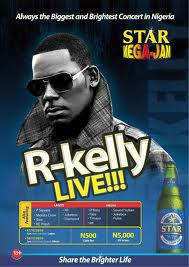 The 2011 edition of the annual Nigerian Breweries sponsored musical concert, Star Mega Jam has been cancelled. According to a press statement signed by the organiser’s Corporate Affairs Adviser, Yusuf Ageni, the concert was cancelled because some logistic challenges could not be overcome.
“The annual music concert, Star Mega Jam, will not take place this year,” Ageni’s statement reads. “The company regrets all inconveniences this will cause the fans, who have been eagerly awaiting this year’s edition of Star Mega Jam.”
Star Mega Jam, an annual concert usually headlined by an international act started in 2000 with Awilo Logomba. Other international acts that have performed at the concert over the years include Shaggy, Usher Raymond, Koffi Olumide, Ja Rule, Kevin Little, LL Cool J, Akon, Kanye West, T-Pain, Nas, Nelly, Busta rhymes, Ludacris and most recently R.Kelly
This will be the second major annual entertainment event to be cancelled this year after reports revealed that the Sound City Music Video Awards will not hold this year too.