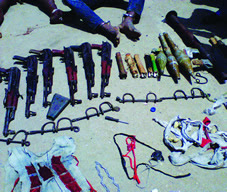 A rice dealer at Marian market and Etim Edem market, Mr. Kenneth Ubah, has
been nabbed by the police for allegedly locking up a 13-year old banana hawker
in a disused deep freezer in Chief Obot Close State Housing Estate Calabar.

A source told Daily Sun that Kenneth, along with others was
working on his storey building, when he invited the girl into the premises on
the pretext that he wanted to buy banana. The source revealed, “When the girl
entered the premises he quickly locked the gate and grabbed the girl and bundled
her into a disused fridge.”


A lady, who claims to come from Edo State,
and does not want her name in print said, “when the girl did not come out of the
premises after a long period, the little boy with whom they were hawking banana
began to cry and one man that was passing asked the little boy why he was crying
and he told the man that his sister with whom they were hawking went inside
(pointing at the building) to sell banana and has since not come out.”
The
lady, insisting that she was present when the incident happened said, “the man
went to the gate and knocked several times but Kenneth refused to open the gate
raising the man’s suspicion as to what might have happened to the girl.”

The man reportedly mobilised others and they forced the gate
open.
“When the gate was forced open Kenneth was standing beside the fridge
barking like a dog while the girl’s banana tray was lying some yards away and
when the people asked where the girl was, he said he did not know.
“When the
people asked what was inside the fridge, the Enugu State-born trader said it was
his dog. When they asked him to open the fridge, he threatened that if the dog
escaped, he would hold them responsible. When the fridge was eventually opened,
they saw the girl inside.”