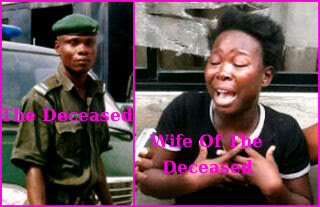 The deceased, Erezidor Ugo, a Prison Inspector, aged 30, is an indigene of
Sabageria in the Kolokuma-Opokuma local government area of Bayelsa State while
his wife, Mrs. Binafegha Ugo, a PA3 aged 25 is also a staff of the Bayelsa
State Prison Command.

There were conflicting accounts of the tragic incident .While one version had
it that the deceased was killed by a policeman who fired at him, another account
stated that he was accidentally killed by a bullet from the rifle of one of his
(Prison) colleagues as the police tried to disarm him.

When Saturday Vanguard visited the residence of the deceased close to Wisdom
Estate, some distance away from the private residence of President Goodluck
Jonathan on Monday morning, the young wife was grief-stricken.

Some neighbours who came to condole the bereaved woman also broke down in
tears when the six year old daughter of the deceased, Tari came and asked her
sobbing mother, “mummy why has daddy not returned, hope my daddy is okay?
Daddy’s body was covered with blood when he was taken away,” the little girl
said naively.

It was a sorrowful moment as his neighbours wept freely, wondering why it
should be Erezidor who they described as gentle and easy going and loved by all
in the neighbourhood because of his unassuming disposition.

The late Prison warder who had just returned with his wife from a wake keep
at Sabageria was playing host to two of his colleagues who had come to celebrate
with him on the fateful Sunday over the new car which he (deceased) bought last
week when he was shot in the presence of his wife, also a prison official and
her six year old daughter.

While the celebration was going on in a sit-out near his house, eye witnesses
told Saturday Vanguard that one of the armed prison officials fired some shots
into the air which caused panic and pandemonium within the Nikton road axis, in
the heart of the state capital.

The gunshots reportedly attracted security attention and a police team led by
the Divisional Police Officer (DPO) in-charge of Ekeki Police Station, Nemi Iwo
rushed to the scene, few metres away from Jonathan’s house. The police team was
said to have noticed one of the Prison Warders carrying a gun and tried to
disarm him but he allegedly refused to hand over the gun and instead removed the
magazine. The deceased Ugo was said to have collected the magazine and took same
to his house for safe keep.

An eyewitness said a police corporal had earlier fired a warning shot
ostensibly to compel the Prison official to surrender the gun in his possession.
It was learnt that as the deceased was returning to the scene of the ensuing
struggle to go with the police to the station, one of the rifles triggered off
and hit the deceased on the left side of his stomach and pierced through the
other side, leaving him in grave danger, eyewitnesses said.

But the deceased, Ugo died on the way to the Glory land Hospital, Yenagoa
where he was rushed for treatment. 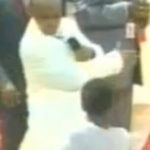