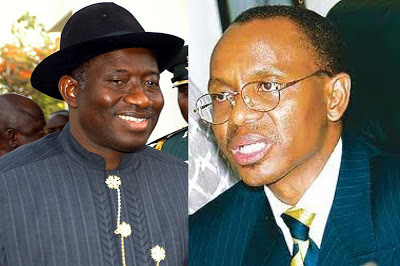 Former Minister of the Federal Capital
Territory (FCT), Malam Nasir el-Rufai yesterday alleged the Federal Government
of being responsible for the continuous bombing in the Northern states
region.
El-Rufai who made this accusation while
granting an interview with “BBC” said that government’s involvement was a
diversionary measure.
He alleged that Jonathan always ordered Boko
Haram to embark on bombings, whenever corruption in his government was about to
expose to the masses……Eh en, continue reading jare. Thank God they know themselves.
“This will assist the government to change the
attention of the masses on the Boko Haram’s activities rather than anxiously
waiting to protest or sue the government for corruption” He said.
He recalled that Boko Haram engaged on daily
basis bombings when the report of House of Representatives Committee on fuel
subsidy came out.
He said,“We have to start accusing the
government because anytime we are in this problem, like when the Farouk
committee in the House of Representatives came out with its report on the fuel
subsidy scam, at that time they started coming out with bombs all over.

“Therefore….we keep on asking the government :
‘ why is it whenever they have problem, that is when those they call Boko Haram
will start bombing. Or are they working together?
“They are yet to give us an answer; there are
many other things which up till now, there is no explanation. Every Nigerian
knows that two years ago, there was rest of mind and he could sleep well at
home. But today, there is no rest of mind, things have deteriorated.
“The economy has deteriorated; salaries are
delayed in the Federal Civil Service. Since I left Abuja last week, April salary
was not paid. That of March was paid in May, even the monthly allocation to
states, they were unable to pay. We don’t know where the money is going so the
economy is in trouble”.
The former Minister also alleged that the
federal government has been receiving $1billion loans on every months.
He urged the masses to visit the website of the
Debt Management Office (DMO) to verify his claim.
“We calculated and I wrote on it in the paper,
nobody came out to say it is not true. Every month since Jonathan became the
President, on the average, every month he takes $1 billion loan.
The Debt Management Office published it, it is
a government office. So, I am not just saying it. Even last month, the Federal
Government sold bond,”
But reacting to this, the political adviser to
the President, Alhaji Ahmed Gulak dismissed the allegation, saying it is callous
and unreasonable.
He urged Nigerians not to take the allegations
of the former minister seriously as they were baseless and not true.
He described the allegations as “just an
outburst from the opposition camp which cannot hold water. It is the figment of
his imagination, it is not true.
“Every right thinking person will not listen to
that and will never agree with what El-Rufa’i is saying. This is because they
are so extreme in their opposition. For example, ministers came out some days
ago and they reeled out all the achievements and successes of governments.
“In the next two months, you will see trains
shuttling between Lagos and Northern Nigeria, God willing. Everybody knows that
road construction is on. Is that not so? Look at the education sector, we have
gone far”.