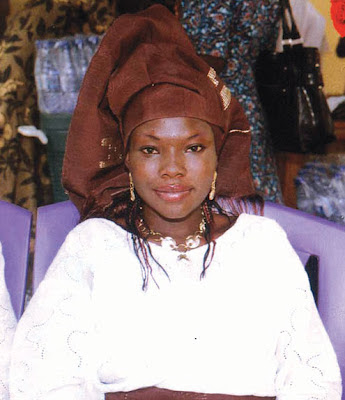 A 23-year old mother of one has been arrested by policemen from Ipaja Police Station, Lagos State, Southwest Nigeria, for calling her ex-husband a member of the Boko Haram sect on Facebook, the social interaction site on internet. The suspect, Afolakemi Mojisola Adeniyi, was arrested following a complaint lodged at the station by her former husband, Alfa Umar Gobir, that his ex-wife posted his picture on facebook and tagged him a member of the Boko Haram.

Umar told the police that he received several calls from friends and associates throughout the weekend, asking him why he joined the sect and that he kept telling them that they were mistaking him for someone else until one of his friends told him to check Facebook…..Continue to see what she wrote on facebook.

Umar said he was shocked when he saw his picture on facebook and the words written below the picture read: “This is one of the Boko Haram any time you have contact with him, bomb him.”Umar further explained: “I was sleeping on Saturday night when I started receiving calls from my friends asking me why I joined the Boko Haram sect. I was surprised since I did not belong to the sect, but one of my friends called me again and said I should go to Facebook. He told me that my picture was there as a member of the sect.“I was shocked when I saw my picture on the social networking site.”Umar told the police at Ipaja that very early that day, he went to Ipaja where his ex-wife lived with her parents and reported the case to them.His ex-wife confirmed to him that she posted the picture on Facebook because he told her that she and her child would die. Umar told the police that few hours after the parents of his ex-wife begged him to forgive her, she posted another one on Facebook saying she did not regret her action.The second posting reads: “Am nt regrtn of d pic upload by me 2 any 1.”When Afolakemi was arrested and the police asked her why she did it, she simply said that Umar told her that she and her child would die.The Divisional Police Officer (DPO) in charge of Ipaja Police Station, Titiladayo Segun, after listening to both parties, advised Afolakemi and her parents to go and beg the complainant for forgiveness because of the little child they have, adding that with the evidence before him there is no way she would not go to jail should the complainant insist on going to court.Gobir told the police that he is yet to decide whether to take his ex-wife to court, adding that he needed to consult his family over the matter.Culled from PM News