Culled From Punch
As the smoke cleared from the New Road Luxury Bus Motor Park, in Sabon Gari Kano, victims of the terror attack, who were lucky to be alive to tell their stories, on Tuesday recalled moments before the bomb went off.
Most of the injured victims are currently receiving medical attention at the Murtala Mohammed Memorial Hospital, Kano.
One of the victims, Mr. Emmanuel Bassey, 37, who works at the Luxury bus park as a  park attendant  attached to Ezewanta  Transport, said he was hurt but lucky and happy to be alive.
In a telephone interview with our correspondent, (before hospital staff ended the encounter), he was full of gratitude to God for sparing his life.
According to him, he and several of his colleagues were going about their normal duties of attracting passengers to board buses for a commission when a small car with two occupants came into the park.
“I rushed to them faster than most of my colleagues. I went and asked them where they were going and one of them said they had yet to decide and that when they decided they would let me know. I left them and went away.
“But four of my other colleagues rushed to the car when they saw that I did not succeed.
“As they approached the vehicle, the driver sped off and headed towards some of the parked buses. Almost immediately, I heard a deafening sound! Then a thick black smoke and fire; there was confusion everywhere. I thank God I am lucky to be alive, my other colleagues died.”
He was not alone, Magawa Goje, 45, a retailer of dried beef, popularly called Kilishi, also counted himself lucky.
Goge said, “I sell Kilishi (dried beef) at the Sabon Gari Luxury bus park. I was busy selling my Kilishi to people who are getting on the bus when I heard a loud band and felt a sharp pain on my chin. That is all I can remember before I woke up on this bed. I heard people saying Boko Haram did this. Whoever did this will rot in the hottest part of hell. Allah will surely judge them.”
Meanwhile, traders in and around the park have relocated into other areas of Sabon Gari as rumours of reprisals continued to fill the air. Security has also been beefed up around places of worship. 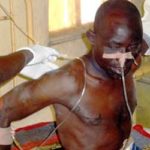