The singing diva poses it up in the latest issue of PYNK magazine, opening up in her interview about her recent engagement, being a mom, acting and much more.
Check out excerpts from her feature below,

You recently became engaged. How did you and your fiancé meet and how did you know he was “the one”?“He’s a music executive. So, we actually met in the studio a long time ago. We reconnected at a music event sometime later and when we talked, it just felt like I knew him. Then I would just run into him in random places in New York…I’d walk into a restaurant for lunch and he’d be there. I ended up running to him at another event and he kept staring at me the whole night. It made me so uncomfortable because I thought he was married. So, I told him that he should stop staring at me because he’s married and it’s not a good look. He was like ‘what are you talking about? I’m not married.’ [laughs] From there, we just started talking on the phone. Then, dating. When he told me he was relocating to LA for his job, I just thought to myself, ‘he’s going to be my husband’. I took that as a sign.”

Black is beautiful. Peep more pictures of her when you continue.

How do you balance your career, motherhood, and preparing to become a wife?
“I don’t know! [laughs] It’s hard. I haven’t worked this hard in my life! My daughter has her own life now. She’s getting older so she has her own schedule now. Sometimes, I want her to travel with me and she’s like ‘no mom. I have a school trip I have to go on.’ [laughs] I have a great support system though. My fiancé, my mom and god-sisters they definitely help out.”
You seem to be very close with your mother. How has that relationship grown or changed throughout your career?
“I think in the beginning it was about trying to figure out how to wear both hats. Being the client and the daughter and for my mother being the mom and the manager. But the foundation has always been love, protection, and wanting the best for me. It took a lot of self work but I can tell her anything and I know she always has my back.” 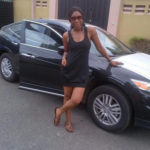