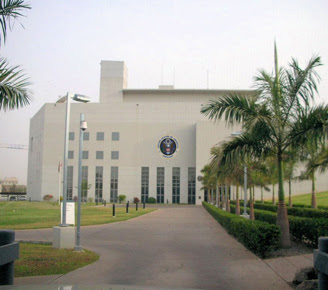 Lmao! Nigerian politicians can act drama shaa! They were elected from drama afterall. Interesting, serves him right. Bloated fool, idiot politician
Culled From Compass Newspaper
HE arrived at the Consular office of the United States in Abuja last week in a flowing agbada, bearing his self-importance on his lapel. By the time he left, however, a member of the House of Representatives from the South West cut a pitiable sight: He had been denied visa.
That was after he had banged tables and engaged consular officers in a hot argument, consular sources confirmed to the Nigerian Compass. He had also issued several threats against the consular official who had demanded proof of his claim that he is a member of the federal legislative body.
The lawmaker, names withheld, flew into a rage when asked to produce his Certificate of Return, usually issued by the Independent National Electoral Commission (INEC) to successful election candidates….Lmao continue
In response, he repeatedly told the consular officer: “Don’t you know I am the lawmaker of the Federal Republic of Nigeria?” He banged the table several times, and the official told the Nigerian “Big Man”: “Do you know that I reserve the right to deny you or to approve your application?”
It was reliably gathered that the lawmaker continued to bang the table and, the official subsequently drew the glass shield between him and the Nigerian big man, signifying the end of discussion.
A letter by the embassy refusing the visa application was, however, silent on the dramatic exchange between the legislator and the official. It simply read: “We have carefully examined your case and regret to inform you that you have been found ineligible for a non-immigrant visa under section 214[b] of the Immigration and Nationality Act.
“This may have been because you either did not demonstrate strong ties outside the United States or you were unable to demonstrate that your intended activities would be consistent with the type of visa for which you applied”.
The letter continued: “To be eligible for a non-immigrant visa you must show that you meet the legal requirement of the type of visa for which you applied and that you will depart the United Sates at the end of your authorised stay.
“Today’s decision cannot be appealed. You are welcome to reapply in the future, particularly if you feel there has been a significant change in your circumstances, or if you have additional compelling evidence to support your case that you did not present today”.
When contacted, the lawmaker confirmed that he appeared before the Consular office and that his application was refused. He blamed the refusal on the handlers of the application process who, according to him, “did not tell me what to say.
They did not tell me the documents to take along, they were asking me of the INEC certificate which I did not know they would ask of. I have never been to the USA, so I did not know the evidence they would ask me to present.”