Malawi’s luxury presidential jet, bought by late leader Bingu wa Mutharika, has been sold for $15 million to raise cash for the impoverished African country, a government official said on Wednesday.
Mutharika, who left the economy on the brink of collapse after he picked a fight with donors whose support accounted for almost 40 percent of the budget, bought the jet for $22 million in 2009. He said the plane matched his status and was cheaper than flying commercially.
Britain, Malawi’s main bilateral donor, criticised the purchase and reduced its aid budget to Mutharika’s government by 3 million pounds ($4.5 million) because if it.
President Joyce Banda, who took office in April last year after Mutharika died of a heart attack, made the sale of the jet a priority as she sought to repair the economic damage.
Chintu Phiri, principal secretary in the office of the President and Cabinet, told Reporters that Virgin Islands company Bohnox Enterprise Ltd had beaten three other bidders for the 14-passenger Dassault Falcon 900EX aircraft. “We have accepted their offer and we are waiting to hear from them,” Phiri said.
The plane reportedly cost Malawi about $300,000 a year in maintenance and insurance.
Since taking office, Banda has also cut her salary by 30 percent, pledged to sell off 35 Mercedes Benz cars used by her cabinet and introduced a host of austerity measures. 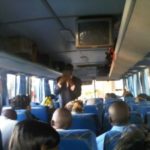