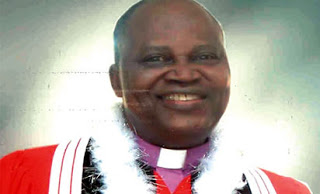 A brand new nation will emerge from the ashes of a revolution
Primate Theophilus Olabayo, 67, founder of Evangelical Church of Yahweh with headquarters in Mende, Maryland, Lagos, had remained one of Nigeria’s respected prophets whose prophesies had shaken the high and mighty in the country.
In this interview with Vanguard, the cleric says there would be a spiritual revolution that will rock the nation to its foundation and at the end of it, a new nation will emerge. Excerpts:What really happened that you went off the radar for several years?I have been talking. A prophet doesn’t just say things. It’s when God asks me to speak that I speak. Many a times, I warn our leaders but they don’t have listening ears. I was the only one who said President Umaru Yar’Adua had a terminal disease and when the condition got worse, the wife called some of us to Abuja to ask of the chances of her husband. I said the husband would die and Jonathan would become president. I warned President Goodluck Jonathan that people would make the country ungovernable for him, but people said I was a prophet of doom. Is it not happening now? Let me quickly say this here that worse than Boko Haram is about to happen.
It’s no secret that you had some health challenges which may have been responsible for your absence for some time. What is the nature of your ailment?I did not lay off. Elijah was sick and he was still doing God’s work. I had an attack. A spiritual attack but I am still hale and hearty. Spirit cannot die. The spirit of God cannot die in you. The body may be weak, it doesn’t matter. But the spirit cannot die. God will continue to speak through you.

Is it true that you had stroke, Sir?It’s not a big deal that someone has stroke but I am okay. While on a trip to Kaduna, God had revealed to me that I would have stroke and would be away for some time. So I looked for someone who knew about stroke; one of my pastors.
How did it happen and what was your first reaction?I was going for a revival in Kaduna and God told me to go with somebody who knows about stroke. The man had to follow me to Kaduna. When I got to Kaduna, they told me one of my townsmen was sick and when I got to his place, God said I should not do anything though he was suffering. I got a room for him, paid his bills and left after praying for him. As I was returning to the church in Kaduna, I had the attack.
And did you have any medical treatment?Definitely!
Why do you think it’s a spiritual attack?I know because God told me about it. I know it could be exhaustion because I pray and fast a lot.
There was this rumour among the people that one of the reasons your church went down was because you were caught in adultery with somebody else’s wife. Is it true sir?God will forgive you. Where? That is why Nigeria cannot move forward. How do you expect me; I preach the Word of God, I preach against adultery, then I’ll be caught in such an act! Impossible! Anybody can lie against you.
At your age sir, are you thinking of passing over the baton to someone else soon?I am a prophet and it is not hereditary. God can choose anybody. When it’s time for me, God will tell me to lay hands on the person. God has not told me yet, I’m still a young man. There are so many people that are coming up, not only one person. Among them, God will raise up leaders. We have young pastors coming up in the church who have the gift of the Word of God, the Bible. Not only vision, people believe that it’s when you just speak in tongues alone or see vision. No! There are different types of gifts.
There are churches as soon as the founders pass away you don’t hear much from those churches…It can’t happen here because it’s God that called me. When it is time, God will raise up another leader among us.
What do you foresee for Nigeria?We are sitting at the keg of gunpowder. We are looking at total darkness in the nation. We need to pray very well because these political people are not doing the right things. Nothing is working; the worst corruption is in Nigeria. There has never been corruption as worse as this. The name of Nigeria is now corruption and some of the journalists are not helping matters. People are being bribed. But there’s going to be a revolution. The poor will overtake the rich. You’ve not seen anything. You’ve not seen Boko Haram. Worse Boko Haram is about to happen and we have to pray against religious war that may last seven years.
Let Jonathan drop his ambition for 2015. Let him work and allow his work speak for itself. Most of his political alleys especially from his Niger Delta are deceiving him and are talking carelessly. They will be consumed one after another. They are already beating war drums if he fails to return in 2015; let them keep quiet. They are not helping matters. Very soon they’ll start bombing. 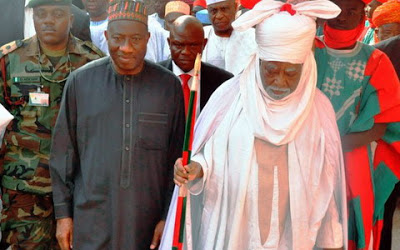 
The chairman of PDP is going to face another problem because there’s going to be crisis and if care is not taken, he is going to be removed. They are going to scatter them and cause confusion between him and the president. Most of these governors that are being sacked are going to join hands together to form another party. A new party will emerge which will be more powerful than PDP. Not APC! Gov. Rotimi Amaechi’s current challenges will create more problems in this country.
What’s the way out of all of these? How can we prevent this doom from coming to pass in Nigeria?The problem with Nigeria is leadership. We are so corrupt and wicked. We manipulate things and we don’t allow God to work. They don’t believe in God. They go about looking for protection; some of them think they are untouchable. They don’t believe there’s God. One day they are going to give account. God is going to intervene in the affairs of Nigeria very soon and a brand new nation will emerge from the ashes of a revolution. The president is being caged by some few people. When you are saying the truth, they arrest you. Some of his close people are enemies and he doesn’t know. If he’s not careful, they are going to run him down.
There are things to be done spiritually. I don’t need to discuss all these with the Press because our leaders don’t have listening ears. We need to come together and work for this nation because we have children. We don’t want our children to suffer. Because if there’s war in Nigeria today, Ghana cannot accommodate the number of refugees. They are holding notional meetings. If they want to do something, somebody will talk today; they will give him millions of naira to keep quiet.
They are not saying anything, they are only exchanging money and that is what is destroying this country. Our refineries are not working; the roads are bad, armed robbers have taken over; there’s no work, now they want to sack people. The man is making more mistakes everyday. Every step he takes, he’s making wrong decisions. Many of his advisers are selfish and wicked people. They are just accumulating wealth. And they are old. They don’t give up. They are acquiring properties.
Some say Nigeria might not survive beyond 2015. Do you agree?I went to America of recent and I prophesied and it happened. Let me tell you, it’s not America that will dictate for us. God is saying that we should avoid war; religious war.
Sir, is there anything the Church or anybody can do to avert a violent revolution?As I am prophesying now, some church leaders and prayer contractors will take it to them to get money, to get oil blocks and buy aeroplanes for themselves. That will not solve the problem.
Despite the health challenges, you still talk like this. When are you ever going to get tired?I can’t be tired. They have tried me. I was the only one condemning Sani Abacha. One day they sent one brigadier to me, I was in my house. As he came, I said something is in your stomach, he said yes, Sir. They said you should come and arrest me, he said yes Sir. I said but you have a daughter, he said yes sir. That day, my phone just stopped working I know it was their handiwork. When he came, God revealed to me and I told him you are going to land into problem, your oga will die.
Before Abacha died, one Austin came to me. He said he has a friend of Abubakar, I said he’s going to be next president and Abacha would die, and it happened. There’s nobody that God cannot catch. If 100 pastors and mallams are praying for them, they can’t survive. God is about to move if they don’t change and repent because they have put us under bondage for long. These pastors, let them change. They will say we are Pentecostals, that doesn’t mean you cannot speak truth. There was a time it was only me and Idahosa that were speaking during Babangida’s era. Most of these pastors that were condemning prophecies, are now prophesing. Where did they see it? Jealousy and envy are the things killing them.
What is your own assessment of late Pa Obadare?He’s a man of God. He’s one of the chosen men of God, a soul winner, has the fear of God. That’s one of the gifts of the Holy Spirit. He was a blind man and was quoting the Bible. A good preacher of God. He’s one of the best in the Body of Christ that we miss.