Menu
Operatives of the Special Anti-Robbery Squad, Lagos state police command are currently investigating three security guards suspected to have attacked, robbed and murdered their boss right inside his office at Eleko area of Lagos state.

The suspects identified as Usman Mohamed, 27; Umaru Adamu, 35; and Mohamed (currently at large) worked as security guards in Trans Africa Farms and Food Company; owned by an Indian national.

HOW THEY WERE EMPLOYED
According to reports, Usman Mohamed, Umaru Adamu, Mohamed (surname unknown) and one other person called Umoru, were employed by the company as security contract staff on January 25, 2015.

Vanguard Crime Guard gathered that on February 11, 2015, Usman Mohamed and Mohamed complained to Adamu Umaru who introduced them to the company, that the company had not paid their salary. Adamu reportedly advised the duo to take their complaint to the Operational Manager, Mr Srivastava Shailesh Kumar.

THE ATTACK ON THEIR BOSS
It was learnt that at about 3:30am, Usman Mohamed and Mohamed broke into the office of the Operational Manager while he was asleep. They allegedly attacked him, slit his throat, stabbed him in his abdomen, stole a brief case and absconded. Luckily, the victim was able to call the Director of the company to alert him of the attack before he collapsed.

It was gathered that the Director called the Supervisor to check on the victim after the call. Reports said when the Supervisor got there few minutes after 4am, he found him in the pool of his own blood. Immediately, he arranged for the victim to be taken to the General hospital, Apodo and the next morning, he was rushed to St. Nicholas hospital on the island where he, unfortunately, died three days later on February 14, 2015.

One of the guarantors identified simply as Ali said that he was from the same village in Kebbi State with Usman. So, he was told to alert his family members and relatives that he has been arrested by operatives of the Special Anti-robbery Squad for a crime committed by Usman.

He pleaded with them to arrest Usman if he comes to their village. Luckily , Usman was apprehended in Kebbi state by SARS operatives and bundled back to Lagos. During preliminary investigation, he confessed that it was Adamu that advised them to carry out the onslaught on the Operation Manager after they complained to him that they have not been paid.

“I am from Kebbi state. Before I came to Lagos last year, I was a farmer. I decided to come to Lagos because each time people from Lagos returned home, they looked good. It was Adamu that took me to the company where I was employed as a security guard. I was placed on N17,000 monthly salary. Sometime ago, Mohamed and I went to Umaru to complain that we had not been paid. He advised us to meet the Operations Manager and demand for our salary. He also said that if we get there and he refused to pay us, we should take any action we deemed fit.

HOW HE WAS KILLED

“When we got there, Mohamed ordered me to stay at the door while he went inside, locked the door and attacked the victim. I didn’t know he had a knife with him. I was stationed at the door when I heard the victim screaming, calling for help. Later, Mohamed opened the door, came out with a brief case he took from the victim’s apartment and gave me N10, 000. He told me he was going to settle Oga Adamu. Sincerely, I don’t know the content of the brief case but I wasn’t happy with the N10, 000 he gave to me.

“That night I saw Mohamed washing himself with water from a well within the compound. When I pointed torch at him, I saw fresh blood stains all over his clothe and body. That was when I asked him why he killed the victim, he then advised me to escape. Before we went to attack the victim, Umaru gave Mohamed some charms to enable him carry out the operation successfully. That is why he is currently at large.”

SECOND SUSPECT SPEAKS
In his defence, Adamu Umaru, 35, from Bornu state told Crime Guard; “There was no time I advised Usman Mohamed and Mohamed to attack and kill the victim. I wasn’t aware that they attacked him. I didn’t prepare charms for Mohamed who is currently at large. I knew nothing about the attack till I received a call from the Chief Security Officer that one of the Managers hasd been attacked by robbers.

HOW IT ALL STARTED
Recounting how it all started Adamu continued; “The Chief Security Officer of the company, early this year asked me to assist him get four security guards for employment. So, I got three persons including myself. I brought Umoru, Mohamed and Usman. I knew three of them here in Lagos but I didn’t know their home towns. Sometime ago, Usman Mohamed and Mohamed complained to me that they were yet to receive their salary. Immediately, I called the CSO who is in-charge of paying our salary. After the call, I pleaded with them to exercise patience; that the CSO would bring their money. But that same night, they attacked the Operations Manager. I do two security jobs. I work as a night security at Best time hotel owned by one Alhaji while I work as a day security in Trans Africa farms and Food Company.” 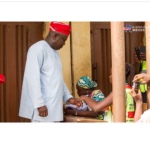