Menu
In the summer of 2010, a man was digging in his garden in northern France when he discovered a trash bag containing the remains of an infant. When he summoned the police, they found the body of another newborn. A few days later, they found more bags in the garage – with six additional small corpses. 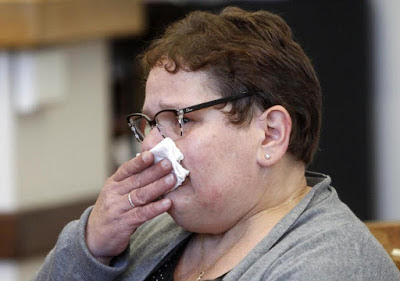 Police contacted the house’s previous owners, and quickly discovered the horrifying explanation: Frenchwoman Dominique Cottrez confessed to secretly bearing and then killing eight of her newborns, saying she feared they were children of a long, incestuous relationship with her father.

However, forensic exams on the remains of the eight infants, and tests on her two living grown daughters showed that all were fathered by Cottrez’s husband, according to court documents.

Cottrez, 51, went on trial Thursday in the city of Douai, accused of multiple counts of first-degree murder of minors.

The worst infanticide case in modern French history stunned the country when the bodies were discovered in and around the Cottrez’ former home in 2010.

Cottrez’s obesity appeared to hide the pregnancies, which went unnoticed by her husband, children, neighbors, colleagues and even doctors at a nearby hospital. 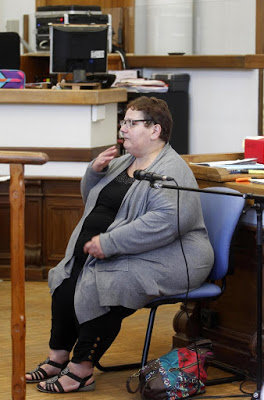 She has told investigators she was mocked as “fatty” in school and closed herself up at the farm with her father, who accepted her as she was.

In court on Thursday, the prosecutor asked if she enjoyed being pregnant with her two daughters, Emiline, 28, and Virginie, 27, both present at the hearing. Cottrez replied, “Yes, for Emiline I liked it, but only for Emiline.”

Dozens of forensic and psychiatric experts, police investigators and witnesses, including her husband, daughters and siblings, will take the stand to help understand the incomprehensible, and perhaps to help the defendant, who sobbed repeatedly during the first day’s hearing, to open up.

A withdrawn, secretive nurse’s aide, Cottrez told investigators she was raped by her father, first when she was 8 and repeatedly through her childhood and teenage years, according to judicial documents. She later entered a long, incestuous relationship with him as an adult, including after she married, and said that it became consenting  and even said she was in love with her father more than she was with her husband.

One of the first witnesses called to the stand Thursday is Leonard Meriaux, who bought the Cottrez family house and discovered the first corpse in 2010. He called police, who found another in the garden.

From one interrogation to another, the police went from surprise to stupor. Cottrez first admitted killing the two infants found in the garden. Then she herself informed the investigators that several other bodies were in the garage of the house, but she didn’t know how many exactly, according to court documents.

She told the investigating judge that she had never used contraception or had an abortion because of a phobia of doctors. She also said she didn’t keep the babies because she was afraid that they were the results of her incestuous relations with her father. She said the killing had become a “means of contraception,” according to the judicial documents.

She said she told her father of the eight pregnancies and the eight murders, and investigators believe he could have helped her hide some of the bodies.

The death she described the most clearly is the first one, in 1989. She said she smothered the baby boy with sheets, placed him in a trash bag that she had prepared in advance, and put the bag in her wardrobe, according to the documents.

The second killing happened when she was hospitalized for an epilepsy seizure. She said she gave birth in the hospital toilet, strangled the child, wrapped it in plastic sheeting and towels, placed it in the closet of her hospital room and then brought it back home, hidden in her garment bag.

Her memories became blurred for the following births and deaths. The last infanticide was in 2000.
Her husband and daughters say they noticed foul odors in various parts of the house, but thought they came from sewage, or their dog, or even their father’s feet.

Cottrez was released from jail in 2012 after spending two years in temporary detention.

In a January interview with a local newspaper, she said:

“I never gave first names to the babies. The first one, I saw he was a baby boy. The others, I didn’t look, I didn’t want to. But when they were in the garage, when it was cold, I went there and covered them with a blanket. “

Cottrez wept as she took her seat. She faces life in prison if found guilty. Her lawyers were expected to argue that she was a victim of rape and incest, and ask for a lesser sentence.The verdict is expected next Thursday.