Menu
Yesterday KanyiDaily.com broke the news that all major markets in Onitsha were shut down and unconfirmed reports said it was cos President Buhari ordered that Boko Haram prisoners be moved to the eastern prisons because the prisons in the north and other geo-political zones were full. 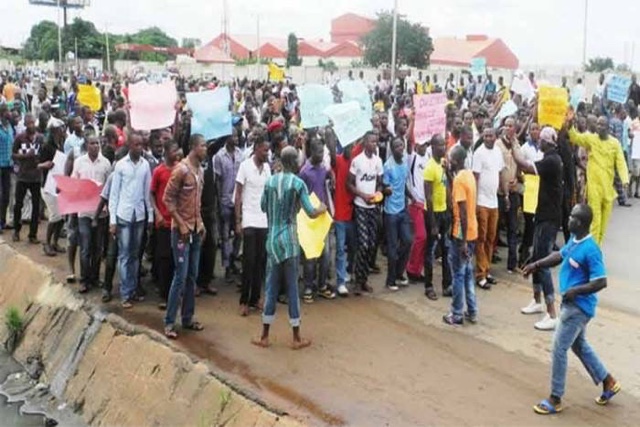 Anambra residents didn’t find the news funny and they took to the streets to protest the move.
Some of the residents were very skeptical about bringing large number of Boko haram members to the east.  The ANGRY youths, yesterday, brought commercial activities in markets in Anambra State to a standstill following alleged  plan by the Federal Government to transfer suspected Boko Haram prisoners to Ekwulobia Prison in Aguata local government area of the state.
Thousands of the youths blocked major roads in the state, including the Head Bridge and the Enugu Onitsha expressway in Onitsha, as well as the popular Zik Avenue in Awka, causing traffic gridlock for several hours.
Though the protest was peaceful, policemen  in Onitsha were later seen firing teargas canisters to disperse the protesters. The security operatives, later joined by soldiers stationed at the Uga junction on  Atani  Road, were also seen removing the barricades used by the youths to block the roads.
Lol am beyond mad this morning, just heard the prison in question is the one in my Village, Did anybody tell Buhari we need Boko haram in Ekwulobia? Ehhhh someone better tell him to keep his prisoners in the north, we don’t need them… Peep another photo when you continue…

In all the cities in the state, the youths waved placards with inscriptions that read,

“Buhari, Igbos will not accept your prisoners”;

“Anambra is special and secured”;

“Anambra is not a party to terrorists and should not be involved in it”;

“We say no to Boko Haram people in Anambra” 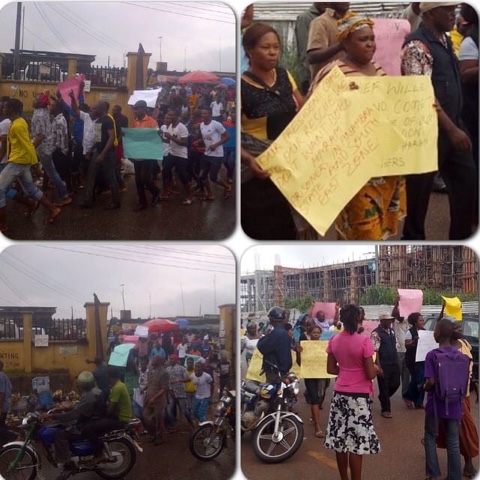 At the Ekwulobia Prison, which was named as the likely new abode for the Boko Haram prisoners, there was nothing on ground to show that a large number of inmates were brought in there. Some officials of the prison however said that they heard a rumour that some prisoners from the northern part of the country would be brought there.

“there was nothing  on ground to show that new inmates were being expected as the situation here has not changed.”

President General of Anambra Markets Amalgamated Traders Association, AMATAS, Dr. Okwudili Ezenwankwo, who addressed reporters in Onitsha, said they had from a very reliable source that plans had been concluded to bring suspected Boko Haram prisoners to the state, adding that they would do everything within their power to resist it.

Pressed to say how they got information that such prisoners were to be brought to the state, Ezenwankwo said:

“We have our ears on ground and that is the much we can say for now. We were informed that federal government wants to transfer the Boko Haram to Anambra State and this is unacceptable to us.

“If you visit the Ekwulobia Prison, you will discover that something is going on there. We are not against President Muhammadu Buhari, but we want him to keep these special prisoners where they belong.

“We know our president is a good man and he will not do anything that will cause insecurity in this part of the country to add to the existing one caused by Boko Haram insurgents. Anambra is peaceful and we don’t want Boko Haram to come and cause confusion.”

According to Ezenwankwo, Anambra traders have already brought the matter to the attention of  Governor Willie Obiano, adding that the governor was mandated by the traders to take their protest over the matter to President Buhari.

Anambra State Police Public Relations Officer, PPRO, Mr. Uche Eze, said the situation was properly handled because the police was on top of the situation.

What happens when there’s a prison break?
Would the Boko haram members go on a killing spree in the east? 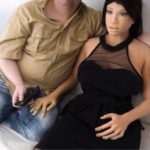