It was a bright day in Ekpoma, Edo State until a hairdresser ran into a young lady she made hair for, who refused to pay.

A phone-obsessed passerby captured the who moment and uploaded it on social media for potential ‘viral things’.

Hair dresser seen trying to pullout the hair she made for a slay queen who refused to pay up, last week, in Ekpoma, Edo State

In the Video, The hairdresser was seen so determined to pull the braided hair she had made for the ‘slay queen’ who was basically trying to stop her from pulling the hair straight from her scalp — which could be dangerous for her scalp, it could bleed, that it felt like her anger was one she had bottled in for a while.

This incident happened on a tarred road as Okada can be seen parading the road as the round street fight ensued. It was truly an ugly sight that sought to reinforce why you should not mess with the average Edo person.

The hairdresser was only stopped from pulling the braids out with her determination by a male intervener who separated them with a violent whip of his belt on the two female fighters. The intervener was also attacked by another female bystander for separating the fighters. 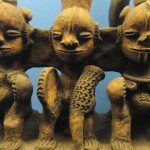