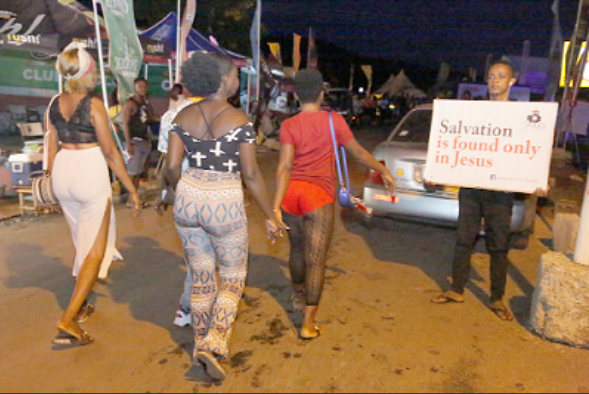 Church leaders have lamented over the immoral activities going on in the area where their sanctuary is located, which forced them to abandon their Easter activities.

The Methodist church is located on the Obomeng High Street, which is the epicentre of the Easter celebrations on the Kwahu Ridge in Ghana where the biggest of street jams take place with alcoholic beverages, indecent fashion and all the things that Christianity frowns on.

This Easter season, with the absence of the congregation, Kasapreko, producers of Alomo Bitters turned the uncompleted church building into an “Alomo Village” which housed a bar, a fufu joint, a live band arena (during the day) and a night club.

When The Mirror newspaper contacted, the Administrator of the Nkawkaw Diocese of the Methodist Church, Very Rev. Daniel Agyei confirmed what he described as a worrying situation.

“In our chapel at Obomeng, we are unable to even attend church service because the whole premises has been taken over by traders. “Unfortunately, things they are trading in like wine and alcoholic drinks are contrary to the occasion we are celebrating,” he said.

He said the church over the years had not insisted on taking the building from the traders because the atmosphere was not conducive for worship and the church was not interested in a confrontation.

Very Rev. Agyei, who is also the Circuit Minister of the Obo Circuit of the church, said the church would have to complete its building and fence it to ward off the traders and companies that turned it into a trading centre during the Easter festivities.

“Easter is an occasion for people to reflect on their lives and compare it to how God expects us to live according to the way Jesus Christ came to show us,” he said.

He expressed concern about the high level of debauchery that had become associated with Easter celebrations and urged young people to have time for God rather than the excessive pleasure they sought.

“Sometimes it looks as if we are rather teasing God about what He has done for us through the type of negative things we do during Easter. Poor dressing to expose ourselves and taking in so much alcohol and engaging in illicit sexual behaviour at such a time, I don’t think it is the best,” he said.

The minister said such had been the influence of the secular celebrations that the Local Council of Churches was compelled to hold its conventions a week before the Easter.

“The way people are into these secular activities, if you put the crusade on the same day it will not work. So you do it a week earlier to sensitise the people to the fact that they should be careful of these things,” he said.