A video has emerged online showing a woman identified as Esther Aiworo, crying out to her husband, Cacudu Benson to assist and rescue her from abject poverty in Benin, Edo State.

Cacudu Benson, owns one of the biggest hotels, Royal Marble Hotel in Benin, and Esther Aiworo is alleged to be his first wife.

In a now viral video which was filmed by an unidentified woman, Esther alleged that her billionaire husband abandoned her with nothing in Benin and left to America with their three children; two boys and one girl.

The video showed the ‘terrible’ state of the woman who was seen looking tattered and also living in a tattered environment.

The woman behind the camera said that she hurriedly came to see the self-acclaimed wife of Cacudu Benson when she heard about her failing health.

“She sells used bottles for survival. She is terribly sick and can not work fine. It is unbelievable, and rather sad.” the lady said.

When asked to convey a message to Cacudu Benson, the poor woman said;

“Friday Ogbor Aiworo, I love you. You are the father of my children. Inspite of all what you do to me, I still love you. No matter the situation, I love you. Come and take me out of here. I am suffering at the moment. Help me please.”

Despite claiming she did nothing to Cacudu Benson, a lady identified as @ebigold23 on Instagram disclosed that the alleged first wife slept with their gateman in Abuja and that was why the billionaire abandoned her at a road side in Benin city.

According to the lady, Esther was a treasure to Cacudu Benson before he caught her sleeping with their gateman. She claims this broke his heart and he asked her to go marry the gateman before he left with the children to America.

“Let me tell u the real story. Many years ago when I was in primary school, Cacudu Benson is the owner of marble hill in benin, he was one of the first guys that started 19 & resigned he made so much money her name is obehi, he loved her so much bought her one of the best cars then, she had twins & 1 which makes the children 3.

“She slept with her gateman who her hubby paid & her reason was that the man was too busy for her, she did it in Abuja then, he didn’t talk or shout, he drove her to Benin & dropped her @ring road he was heartbroken had to leave the country with his kids cos he couldn’t stay in around Abuja not to talk of Nigeria cos he said he would still feel it.

“The man almost ran mad, she was doing it even when Benson was around, she should say the reason, this woman was worshipped by Ben then, every woman siad they wanted to be like her, see her crying now without begging for her wrong, the man told her to marry the gateman & left.” 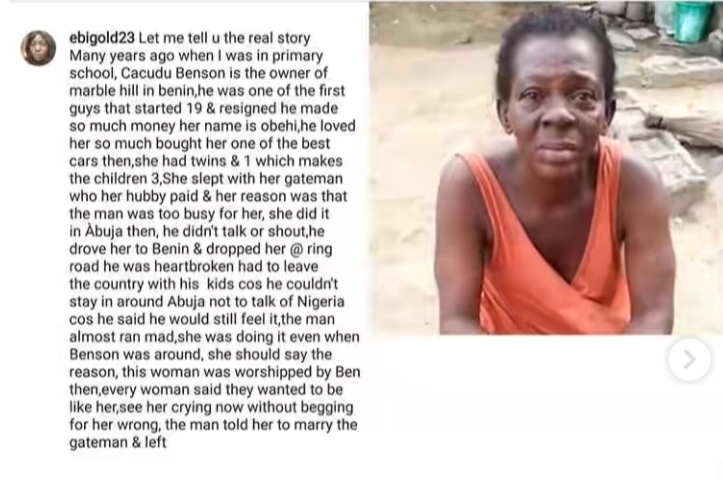 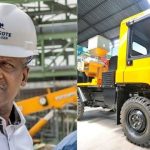 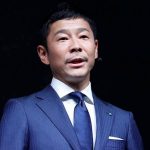