Pastor Folayemi Richard of Victor’s Church, Ilorin, Kwara State, has been accused of beating his pregnant wife to coma at their residence in Ita Olodan, Upper Gaa-Akanbi in Ilorin town. 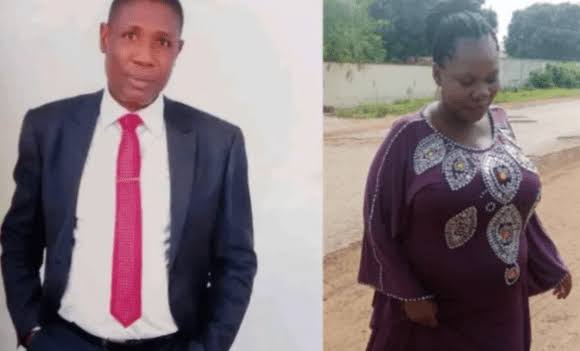 The wife, Odunola, who made the accusations, said the incident occurred in January 2021 when their wedding was three months old and her pregnancy was a month old.

“Last year September 26, we got married and we’ve been living together as husband and wife. When our wedding was one month old, there was terrible crisis occurred. I finished eating then heave a sigh of relief, he heard that queried.

“As a result of that, he left me and went inside the room, I followed him, he said, henceforth, we should be living as neighbours not as a couple any longer. He said he was perplexed that I hid things from him, I told him I never did. He left me in annoyance and I ran after him, pleading for sin I didn’t commit. He pushed away and I dashed my head on the wall. For 30 minutes, I was unconscious.

“When I woke up, I challenged him for abandoning me and for not been remorseful then he said he doesn’t care if I die. That day, I knew I’ve entered into the devil’s nest. When I got pregnant, my husband became hostile because I was vomiting.

“All of a sudden, he ordered me to stand up while he takes me to the hospital, where he said he will dump me, I negated against this, then, he started insulting my parents, I cautioned him again, in lieu of this, he approached me with a snap.

“He began to beat me like an object with no life. I tried running away but he drew me back. At this time, the beating had graduated because he has gotten cable wire which we use for speakers in the church.

“I started shouting for help, the old woman beside me was calling for help too but no one came to my aide. I became so weak and even vomiting. I couldn’t raise my head again. When I realise that I will soon die if the torture continues, I drew strength within me and I dashed out of the house, he followed and started dragging me on the ground saying he doesn’t want the marriage again.

According to The Informant, Odunola has complained to the National Human Right Commission to seek justice over the matter.

She also alleged that her husband had denied her access to move her belongings from the house. She added that her certificates and other valuables are still in the house.

As at the time of this report, the pastor’s mobile lines could not be reached as they were switched off and efforts to get any church member at the church premises also at this same time, failed.

IN OTHER NEWS: A 49-year-old evangelist, Chinwe Ekwe, has told the court in Lagos State that her husband is a womanizer and he sleeps with church members.